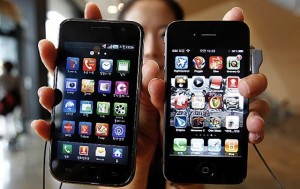 From Cupertino in California to Seoul in South Korea, a silicon curtain has descended across the planet. Behind it, Apple and Samsung are waging a World War 3G in courtrooms and tribunals across ten nations. Last month, Apple won a decisive victory. But there is more at stake than the immediate future of the smartphone-tablet industry: the litigation is fundamentally defining and redefining what it means to “innovate”.

On August 24, a United States jury found that Samsung had wilfully infringed six of the seven patents presented by Apple, awarding US$1.05 billion in damages. Samsung shares plummeted whilst its executives struggled to contain the public relations fallout. Apple shares rose markedly, buoyed by the home field victory.

The verdict is remarkable for its severity. Last month, a similar case in Seoul concluded differently, that both companies were guilty of mutual patent infringement, awarding a paltry USD$22,000 to Apple and USD$35,000 to Samsung. In July, the High Court of England and Wales ruled that Samsung had not at all infringed Apple tablet designs. How could it? The Galaxy Tab is simply “not as cool. The overall impression produced is different”. And whilst a trial over wireless technology continues downunder, Apple’s request for a preliminary tablet injunction was declined by the High Court of Australia in December.

But these cases are also remarkable for their absurdity. Of the six patents Samsung infringed in its US trial, three were utility (software/hardware) patents, and three were design patents. The three utility patents claim the tap-to-zoom gesture, the multiple-finger-swipe gesture, and the “rubber band” mechanism by which an Apple menu will “bounce” back if a user scrolls to the end. The three design patents lay claim to “rounded square” menu icons, and the “rounded corners” of the iPhone body. This is not surprising for a company which prides itself on aesthetic style.

Apple’s geometric imperialism did not end there. Their seventh, failed argument related to patent no. D504,889. The official patent document is worth perusing. It contains nine diagrams of a blank, rounded rectangle, in various orientations. Not even a jury of patent-holders thought Apple was entitled to exclusive use of the oblong.

But six arguments prevailed. With each finding in Apple’s favour, the court gave legal force and weight to otherwise questionable patent claims. Patent applications must satisfy criteria of “non-obviousness” and “novelty”, among others, and the outcome of the case implicitly lowered those standards. Judge Richard Posner made a similar complaint in June after dismissing a separate Apple case against Motorola. He publicly questioned the value of any technology-related patents, when digital innovation is so much cheaper than comparable pharmaceutical innovation, for instance, and when individual devices require thousands of integrated components.

The success of Apple’s utility patents has led to an explosion of gesture-related patent applications in the US. With most filed over the past year, Microsoft has made 69 such applications, Google 13 and Samsung 17, though Apple is well ahead of the game with a comprehensive “gesture dictionary” of “tactile events”. The tech industry is, in short, patenting intuition and our fingertips.

Defenders of the billion dollar verdict see it as a necessary evil, deterring complacency and encouraging innovation. Without such protection, they say, the consumer electronics market will fill with scarcely differentiable alternatives, and that in any case, patented components of universal necessity (“standard-essential”) are required to be licensed to competitors at reasonable rates. They argue that it is costly to innovate, and that the effort should be rewarded.

But how costly and how original is the swipe of a finger, or the curved corners of a ‘squircle’? And of all their major competitors, Apple is among the most complacent in developing newer devices – a product of its aggressively litigious, defensive corporate ethos.

A dependence on patent law is destructive of a culture of innovation. By the time the lawsuit makes it to court, the technology in question is long outdated. When these cases finally wind their way through trial and appeal, the offending devices will be long obsolete. And as far as product improvement is concerned, competing in a courtroom is no substitute for competing in the lab and in the market. Besides, Apple surely understands that being first is far more profitable than being alone. One could be both, but securing its monopoly has left Apple vulnerable to Samsung’s desperate (and equally pathetic) counterclaims, and has cost both Apple and Samsung significant public credibility.

Innovation, in short, is built on innovation. The Walkman and the iSeries lie on the same continuum, however much Apple projects an image of sui generis, inspired genius. The “next big thing” will come from constructive competition, not by exploiting overburdened patent systems and exasperating judges across the globe.