In August 2010 in South Korea, a gas-operated transit bus overheats and explodes.

In July 2011 in Pakistan, a gas bus catches on fire after its cylinder explodes on the Islamabad Express Highway.

In October 2011 in Indonesia, a gas bus explodes while refuelling at a power station.

These overseas cases were all reported to have been caused by cylinder failure. But as it turns out, Australia is just as vulnerable.

To date, 11 gas fires have been recorded nationwide. The most notable of these, is the July 2011 Port Botany explosion in Hillsdale.

Gas-powered buses have been seen as environmentally-friendly alternatives to their diesel counterparts. But they may not be as good as they seem. 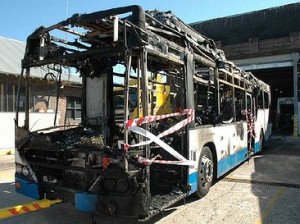 Growing studies have questioned gas buses’ capacity to meet expected outcomes. In a paper produced for the International Association of Natural Gas Vehicles (IANGV) in 2000, it was detailed that “in some cases, the reliability of natural gas buses was only half that of diesel equivalents.”

The same report described gas engine overheating as a common problem, while a 2004 study of gas bus cylinders revealed that gas-powered school buses “could be expected to be significantly more prone to fire fatality” than diesel-operated ones.

If these statistics are anything to go by, they paint a picture of technology prone to failure. Failure that could reasonably be seen to include spontaneous combustion.

Chris Preston, Bus and Tram Division Secretary of the Rail, Tram and Bus Union (RTBU), firmly maintains that there is cause for concern.

“There have been 11 gas fires since 2008 in that model bus in Australia – that exact model gas bus, which is the OC 500 Mercedes Benz. I believe that buses need the fire suppression systems suited to their engine base.”

However, it’s not all cut and dry. “I don’t think they’re ticking timebombs,” says Dr Geoffrey Clifton, Transport and Logistics Management Lecturer at the University of Sydney.

“I think they’re generally safe and bus travel is safer than most other forms of transport, so in general, I think passengers don’t need to be worried.”

Following the Port Botany fire in 2011, where a passing motorist notified the driver of a gas bus that his vehicle was in fact on fire, it was recommended by The Office of Transport Safety Investigations (OTSI) that an 18-month installation deadline on fire suppression systems be determined.

This was awarded in July 2012, but STA believes the units will be well installed by April 2013. The OTSI report also details STA’s implementation of a weekly inspection program, which sees to ensure that every bus that goes on the road passes all road worthiness checks.

Although routine bus checks can assist in reducing the risks associated with engine fires, a fire suppression system can do more. As voiced by RTBU on their website, they “could be the difference between a minor incident and a major catastrophe the next time a problem occurs with gas-powered buses.”

The government assures us that everything is under control, but can we as the travelling public relax knowing that these gas buses are roaming the streets without added safety features?

“I would say that we can relax,” says Dr Clifton. “I think we can be assured that they’ve properly investigated what happened in all of the separate incidents and do have plans to try and improve things going forward.”

But Shadow Transport Minister Penny Sharpe maintains that the government needs to expedite the installation of fire suppression systems. She says fast-tracking the fitting process will prevent the risk of future endangerment.

Meanwhile, Mr Preston is hopeful the government’s targets will be met. He says, “I’ve got to believe it’s achievable because State Transit stood in front of the Industrial Relations Commission and set that goal of 18 months, explaining it could be achieved.”