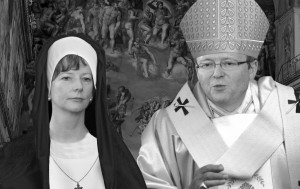 Following the shock resignation of Pope Francis, the second longest serving Pope of 2013, the ALP has been collectively appointed as the new head of the Roman Catholic Church.

This comes after the ALP’s landslide loss at the WA state election, and makes the Holy See the only government other than South Australia to be controlled by the ALP without support from The Greens.

Analysts have commented on the dominance of the Catholic Right faction, the anti-abortion views of Labor head kicker Joe de Bruyn, the antipathy towards same-sex marriage by leader Julia Gillard, and the majority of conservative white males in the voting College of Cardinals, as reasons for their victory.

The Liberal Party immediately spoke out against the ALP, citing their lack of experience in communicating the will of the Holy Trinity. On the other side, The Greens have demanded the ALP cut tax exemptions for the Catholic Church in the Vatican.

“We need to fund protest chains and nature reserves, not the world’s oldest existing religious institution.”

Scandal has rocked the election, however, after Kevin Rudd took over leadership by default due to canon law against female papacy and female priesthood. In the new administration, Rudd has declared that he will demote Gillard to “just a nun.”

The future of the ALP in the 2013 Federal Election is unclear, but pundits have noted that it is unlikely that the Catholic 25% of Australia will vote against God.

“But it really depends on whether or not Rudd stays leader, to be honest,” one analyst noted.

There has been a notable consensus in the Australian priest community for the choice.

“At least they won’t investigate the … thing anymore,” one anonymous priest noted from his locked confessional booth.

“Not that they really were, eh?”