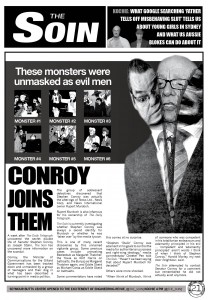 A week after The Daily Telegraph uncovered the secret double life of Senator Stephen Conroy as Joseph Stalin, The Soin has uncovered more information on the scandal.

Conroy, the Minister of Communications for the Gillard Government has been tracked down and unmasked by a group of teenagers and their dog in what has been described a turning point in media politics.

Rupert Murdoch is also infamous for his ownership of The Daily Telegraph.

The Soin is currently investigating whether Stephen Conroy was always a secret identity for Murdoch or whether he was ‘taken over’ by the media tycoon.

Some commentators have noted this comes at no surprise.

“Stephen ‘Stalin’ Conroy was adamant in his goals to control the media for authoritarian purposes and right-wing ideology,” media commentator Cheeter Pen told The Soin. “Haven’t we been saying that about Rupert Murdoch for decades?”

Others were more shocked.

The Soin attempted to contact Senator Conroy for a comment but remembered he did not actually exist anymore.