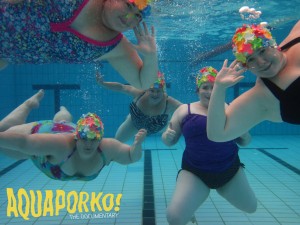 Last week, I met with Kelli Jean Drinkwater (KJD) to discuss ‘fatness’ and the release of her enchanting documentary, Aquaporko!, which follows the story of a group of fat and fabulous synchronised swimmers in Melbourne. It has already won the Audience Choice Award at the Mardi Gras Film Festival after its debut screening and deservedly so: it is a beautiful, engaging, optimistic, and empowering film.

Fatphobia, or ‘size politics’, is very real, but often overlooked. For the uninitiated, anyone who makes assumptions about, ridicules, judges or marginalises a person because of their body size is being fatphobic.  Fatphobia is an incredibly powerful social tool used to control and police fat people’s bodies. This behaviour does not exist in a vacuum: it is systemically legitimised by institutions and dominant discourses (think medicine, the media, fashion, education, sports). It is pervasive and probably the last form of discrimination that is still widely socially acceptable.

Issues relating to our body shape or size, when positioned within the western world’s view of ‘fat’, are never socially or morally neutral. I asked KJD about her thoughts on the moral impacts that are enacted upon fatness. “I think it relates to health and this idea that fat people cannot live in healthy fat bodies and are inevitably part of an ‘obesity epidemic’,” she says. “There are two sides to the moralising of fatness: firstly, people have been taught the idea that fatness is aesthetically unacceptable. So, you have that socialised aspect of what’s attractive but you also have this higher moral ground around health where people assume that it is impossible to live a healthy, fulfilled life as a fat person, which is completely untrue.”

KJD chooses not to dwell in an oppressive, fatphobic frame, nor does she allow the narrative of Aquaporko! to go down that path. She has a different concept of what ‘living fat’ means. “Fat is a huge part of my identity. It means abundant, strong, fierce, overflowing and powerful. Fat is also much more than the body I inhabit, it is a politic that I live my life by.”

KJD is unapologetic about being fat and tells me her body politics are partly an attitude. “I present this idea that there is absolutely no reason why me being in a fat body should have any impact on my life being as fabulous or full as it can be,” she says. “My attitude of happiness and embodiment has gotten me far in my life and people are often left with their assumptions on fatness when they meet me, because I do have a very healthy confidence in all areas of my life.”

In a patriarchal, sexist and fatphobic western world, one of the challenges for many people, but particularly for fat women, is putting on a swimsuit and confidently accepting their physicality in public.  This is why so many people can, at a very deep level, relate to this film. A large part of Aquaporko! is about visibility and the idea of body positivity in all shapes and sizes.  The stark contrast of this film’s synchronised swimming and body politics, compared to mainstream media’s sexist portrayals of a size eight in a bikini to sell anything, is clever – but you quickly learn it is not just a film about babes in swimsuits. As KJD puts it: “There’s a whole politic behind this very camp activity. It is a radical and beautiful reclamation of our bodies.”

Aquaporko! is a triumphant, uplifting and accessible documentary that emerges amidst the media saturation of a photoshopped fiction of the ‘perfect’ sized body and fear mongering around ‘obesity’. It is delightful to see a film where ‘fatties’ are confidently fat, visible and three-dimensional.  The representation of fat bodies on the big screen is wondrous enough but when you see them doing their thing with their floral caps on wiggling their fat asses in the water it’s nothing short of gorgeous.