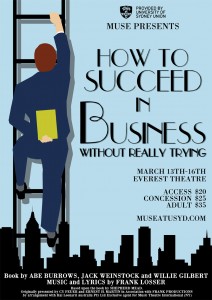 Written by Frank Loesser and Abe Burrows (of Guys and Dolls fame), MUSE’s 2013 major How To Succeed in Business without Really Trying follows the rises and the falls of J. Pierrepont Finch, a young window-washer, as he ascends to the summit of a multinational company. Directed by Amy Lester, MUSE’s production is teeming with exuberance, exceptionally strong singing and the ‘impetuosity of youth’ lauded in the musical.

The rehearsal I saw was sans props, set and costumes, but the performances of the actors and chorus were strong enough that before long it felt like a full production. Aidan Kane, as the nepotistic nephew of the boss’ wife, blends parodic caricature and a kind-of twisted integrity masterfully. He is a truly pathetic villain of the boo-and-hiss variety, and have no worries, he gets his comeuppance.

Jordan Shea and Sophia Edmonds as J.B. Biggley and his secretary Hedy La Rue – an exotic name with a body to match – are a force to be reckoned with on stage as the show’s premiere power couple. The over the top caricatures, while at times out of step with the other actors, work wonders on stage, and will leave you laughing (or shaking your head in dismay).

We find a solid leading man in Gavin Brown, who while possessing the prerequisite singing and dancing chops, unfortunately does not have the charisma needed to portray the admittedly difficult role. How to Succeed asks the audience to believe that this young blue-collar worker, with nothing more than a suit, his voice, and the titular self-help book, can rise to the top of a company in a matter of weeks, and Brown doesn’t quite get there. That said, he’s certainly not a ‘weak link’, and there is true warmth in his relationship with Rosemary (Anna Colless).

The script does contain some dated gender stereotypes – the original book was written in 1952 – and at times they feel inadequately dealt with; while it’s not a huge problem, certain numbers (‘Happy to Keep His Dinner Warm’, ‘Cinderella, Darling’), leave you feeling slightly uncomfortable. However the satirical nature of the show wins through, and it becomes hard to take anything anyone says or feels seriously: hello, business.

This show is incredibly entertaining. The performers are obviously having the time of their lives onstage, and this is inevitably transferred to the audience. Lester and her cast should be commended for brilliantly exposing the emptiness of our everyday lives, and in turn filling them with song and dance.

How To Succeed in Business without Really Trying opens at 7:30pm, Wednesday March 13 at the Seymour Centre. The show runs until Saturday.