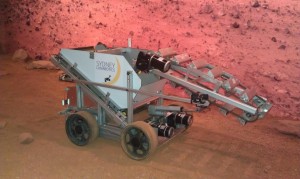 Nothing beats a space robot. Except a space robot with a laser.
In May, NASA will stage its fourth annual Lunabotics Mining Competition at the Kennedy Space Centre, Florida. The contest requires teams to develop rovers capable of mining lunar regolith, while promoting interest in science, technology, and mathematics. A group of engineering virtuosos at the University of Sydney will compete this year with their ‘Lunabot’ – the first Australian team to do so.
Designed, tested, and built on campus, ‘Lunabot’ loosely resembles a no-frills version of NASA’s Curiosity rover, with the raw functionality of a machine whose sole purpose is to shovel dust.
And, yes, it has a frickin’ laser.
When Honi met with the Sydney Lunabotics team, they were assembled around a table strewn with wires and laptops. Equations were scribbled on the walls of their PNR Learning Hub pod, and take-away food containers littered the floor. It was a microcosmic Silicon Valley.
Predominantly third and fourth year students, the 16 undergraduates have worked almost full-time on the project since late last year, led by Daniel Linton and supervised by Dr Ali Goktogan.
To succeed in the test pit at Cape Canaveral, their 74kg rover must be able to drive over the temperamental quicksand that comprises the uneven lunar surface, navigate boulders, collect at least 10kg of moon dust, and deposit it at a predetermined location. Points are awarded for the amount of regolith collected, and deducted for the weight of the robot. A substantial jackpot is also available for teams that field fully autonomous rovers. None of these have been successful, but the Sydney team hopes to be the first.
Reflecting on their chances against 50 other groups, from countries as diverse as Colombia, Tunisia and Bangladesh, Martin Cheung thinks Lunabotics is a “big contender.” First prize – the $5 000 aptly-named Joe Kosmo Award – would never recoup the $15 000 cost of the robot. But for the team, the prize is in the process. “I’ve really come to respect the role of management,” explains Felix Kong. He, Linton and Cheung agree that learning to coordinate different groups working on different sub-systems has been essential as they tune their final prototype.
The team has enthusiastically discharged its public outreach duties, with visits to high schools, representation at various space mining conferences, and an exhibition at the Powerhouse Museum on the occasion of its twenty-fifth anniversary. Asked why Australia has a near-invisible presence in the space technology industry, they cite an abundance of expertise but a lack of government incentives or public initiative. Outreach is a crucial part of the solution.
The competition is timely. The past year has seen personalities as varied as James Cameron, Larry Page and Eric Schmidt commit to space mining projects. Whatever the result, it is gratifying to see the University of Sydney visibly engage with institutions as exotic as NASA. Deep down, we all regret choosing essays, cases and accounting over extraterrestrial robotics.