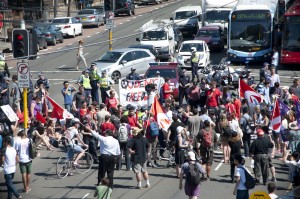 University management and unions are grinding towards a deal which would bring the current round of industrial action to an end.
Though both sides are cautious in their public statements, it has become clear that negotiations relating to the University’s proposed Enterprise Bargaining Agreement—the document that determines the conditions, rights, and wages of staff—are making progress.
Just days before the most recent 48 hour strike, Provost and Deputy Vice-Chancellor Stephen Garton sent an email to staff announcing the University’s intention to keep several provisions it had controversially attempted to scrap. In an attached video Professor Ann Brewer, another Deputy Vice-Chancellor who is heading up the University’s negotiations, announced that anti-discrimination clauses and commitments to limiting the number of casual employees would be kept in the new Agreement. The University has also agreed to set a target number for Indigenous employees.
Brewer declined the opportunity to respond to Honi Soit’s questions about the specifics of the current negotiation process. “It is best that we do not conduct our negotiations via the Honi Soit [sic],” she said.
But both the National Tertiary Education Union (NTEU) and the Community and Public Service Union (CPSU) said negotiations had taken a positive turn since the 48 hour strike. They indicated that in the two meetings with the University since the strike, progress had been made.
Michael Thomson, NTEU Sydney Branch President said this included progress on key issues such as the 40:40:20 provision, a clause that dictates the ratios of research, teaching, and administrative work academics are expected to undertake. The University had been arguing for the removal of the clause.
Thomson’s counterpart, CPSU Branch President Grant Wheeler echoed this assessment. “There have certainly been positive signs…[management] are showing signs that they’re more willing to negotiate,” he said. Wheeler believed the University bargaining team were now ready to compromise on a clause that the CPSU said would have allowed almost all new General Staff to be offered transient fixed term contracts instead of steady full time positions.
However, both unions were at pains to stress that if the University did not continue to negotiate in good faith, industrial action would again be taken.
“If they don’t actually engage properly in the bargaining there will be further industrial action, that’s for sure,” Thomson said. The NTEU and the CPSU were confident strike action had played a major role in forcing concessions.
Thomson added that on key issues, such as rates of casualisation, reverting to the standards in the former EBA would not be sufficient.
“All they’ve done is agreed to put the clause back in that’s in the current Agreement. With 50% of teaching at the University done by casual academics with an increase of casual academics of 3% over the life of the last Agreement this isn’t good enough,” he said.
Deputy Vice-Chancellor Stephen Garton disputed the NTEU’s statistics, arguing that the percentage of casual academic staff has decreased from 24.7% in 2001, to 19.9% last year. He added that the casualisation of administrative and professional staff had also fallen across the same period, from 14.9% to 14.5%.
But even once these issues are settled, the University and the unions will still have to agree upon the rate of wage increases. The University has offered 2% per annum but the unions are asking for 7%.  In light of these continuing disputes, the NTEU will meet on Wednesday to discuss the prospect of further action.
Though negotiations are moving with increased pace it will be some time before further strikes can be ruled out entirely.