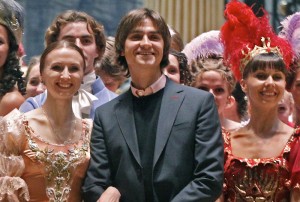 Sergei Filin was a principal dancer for Moscow’s famous Bolshoi Ballet; he is now its artistic director. At 11pm on January 17, Filin was attacked as he walked from his Mercedes to his apartment building in Moscow. The attacker’s face was covered as he threw a vial of sulphuric acid at Filin’s face. Losing his sight, Filin shouted as he staggered and rubbed snow onto his face. Doctors now believe the snow, and the fact that it was -23˚C that night may have saved some of Filin’s sight.

On March 5, police arrested Pavel Dmitrichenko and two accomplices. Dmitrichenko is a dancer at the Bolshoi and the alleged ‘mastermind’ of the attack, if such a word is appropriate for such a brutal and simplistic crime. He stares out from his mug shots like Macaulay Culkin staring out from one of his mug shots.

The next day Dmitrichenko confessed to paying an ex-convict 50 000 rubles (about $1600) to attack Filin, but not to use acid. Dmitrichenko’s disagreements with Filin over finances, rehearsals and roles are well-recorded. Dmitrichenko is described by colleagues as having a “fiery temper” and is in a relationship with ballerina Anzhelina Vorontsova, whom Filin refused to cast in a number of glamorous roles including Odette/Odile in Swan Lake, the role Natalie Portman’s character grapples with in Black Swan.

Perhaps more interesting is the context of the Bolshoi’s grubby internal operations. Gennady Yanin was expected to be appointed artistic director when Filin was given the job. That is, until explicit pictures of him having gay sex were included in an anonymous mass email. Homosexuality is accepted among Russian dancers but is not tolerated in a Russian public figure, and Yanin quickly resigned. There were further rumours of ballerinas being pressured to act as escorts to rich donors, who have bankrolled a recent 1 billion dollar restoration of the theatre.

In Russia, ballet is popular among a much wider section of the population. Details of the Bolshoi operations were discussed widely in the Russian press well before the acid attack in January. The Bolshoi has always been representative of Russia, whether Tsarist, Stalinist or Putinist. And this story of violence, vendetta and vice is a morality tale for contemporary Russia.

In all art there is a separation of product and process, and often a darkness to the process without which the product would not glow. We do not see  the hours Michelangelo spent watching dissections, but the results are there on the Sistine Chapel’s ceiling.

In no other discipline is this divorce of reality and performance as obvious as in ballet. The grace and elegance on stage only come from painful rehearsals, injuries, years en pointe and often anorexia. In the past, dancers suffered lost childhoods as the result of the tyranny of the state. In recent years this has probably been replaced by the tyranny of domineering fathers.

Dmitrichenko is known for his portrayal of passionate, strong roles, most recently Ivan the Terrible. Were those performances only possible because of some madness of his own? Can we separate the dancer from the dance?

Some of Dmitrichenko’s colleagues have questioned his confession. They say that he may be unstable but he is incapable of the crime he is accused of. Many believe his words were forced, and in Russia’s justice system that sort of practice are not hard to imagine, although near impossible to confirm.

Ballet is creativity with an unadulterated display of human motion. It is sport without scores, statistics and loyalties getting in the way, and now it has another twist in its backstory that is every bit as extraordinary as the art itself.