It’s a touch before nine o’clock on a Friday morning and there’s already a queue forming at Uni Brothers, the endlessly popular kebab shop in the Wentworth Food Court. A guy beside me is chowing into a breakfast of beef-decked rice smothered in barbecue sauce. Behind the Uni Brothers counter, there are four men swiftly pulling pide out of the oven, piling up fresh tabbouleh, and tending to the rotating skewers of glistening meat. A group of women order kebabs. Did I mention it’s not even 9am? 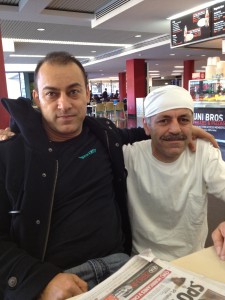 The two eponymous “Brothers” are sitting down with coffees and the paper, enjo ying a moment of relative calm before the real rush begins. Nuri and Henry are in fact business partners, brothers-from-other-mothers with twenty years of friendship behind them. Pide-master Henry prepares the bread, while charismatic Nuri fronts the register, managing the ever-extending queue. “I’ve got a good memory for faces,” Nuri explains, “and I love chatting with the students, getting to know the regulars.”

Though they’ve chalked up a fair few regulars over eight years of business here, this isn’t their first venture. Their original shop, Brothers Kebabs on the Princes Highway in Banksia, has been open far longer. Paul McJannett, former CEO of the USU, caught a whiff of their potential and made them an offer. “He’d been checking our shop out and knew we had a really good reputation,” Nuri explains.

At the time, students were unenthused about the Union’s dining options. “People weren’t happy with the food they had,” Nuri explains, “and we came in here and gave them a little kick up the backside.” The Uni Brothers difference, Nuri proudly maintains, is quality. “You can’t get any better than what we use.” They source and prepare the meat themselves, and make all the products fresh daily. He gestures to recently revamped noodle house Little Asia and the salad bar, Raw. “You can see everyone’s put their quality up and I think that’s in part because we’re here.”

The downside, Nuri admits, is that “we work on a very low profit margin. We have a four month break during the year, and now we’ve got the strikes on. It really affects us. But I think people appreciate the food and the price and that makes us all happy.” Their business model seems to be working, however. Seven years ago, they opened a third branch at UTS, and last year turned down the opportunity to expand to UNSW. The Brothers now boast a team of about 30, largely composed of old friends.

It’s a labour of love, with staff often working 12-hour days. “I was here at six this morning,” says Nuri, “And normally we close around six thirty/seven. We don’t say no to anyone. It’s a very long day, but we try to make everyone happy, we always put a smile on your face.”

At heart, however, it’s all about the food. “We love it, we just love it,” says Nuri, who fondly describes his most popular creation, the greasy-but-glorious combination of chips, rice and meat known as the Meat Box. “I was actually going to call it the heart-attack box. But I think we’ve got a really healthy food line,” he maintains, citing their newly introduced meat-and-salad box, fresh dips and gluten-free chicken. “We’ve gone beyond a kebab shop.”

Nuri’s pride in his product is obvious. “Look at this guy,” he says, nodding at the man nearby with the beef plate. “I was watching him eat. He just loves it, you can tell he’s really enjoying it. I saw him lick his plate. That really makes me happy.”