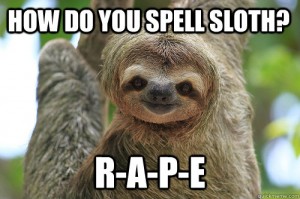 Over the last few months, some of you have been corrupting my hitherto-pure news feed by sharing and liking these filthy, misogynistic and pathetic “sloth rape” memes.

Don’t play dumb; you know the ones I’m talking about. There’s usually a picture of a sloth perched next to a woman’s ear overlaid with some supposedly amusing text. Examples of knee-slapping corkers include: “I would rape you, but I don’t rape sluts”; “Go ahead, call the cops. They can’t unrape you”; and “You better not shout, you better not cry, you better not scream I’m going in dry.”

Here’s a heads up: rape jokes aren’t funny. They attempt to make light of something that is utterly unconscionable, profoundly traumatic and often life-destroying, and they fail in this quest. Always.

But maybe you think that outsourcing rape jokes to sloth pictures makes them funny, socially acceptable, and somehow less offensive? You might even think that you’ll convince people that the sloths actually write the jokes, and that the memes aren’t just a really shitty cover for your own sick sense of humour. Perhaps your creepy little delusion goes so far that you have convinced yourself that sloths are actual rapists, and that you’re nobly warning the vulnerable public through incredibly highbrow, subtle and nuanced humour. Who knows?

Whatever your arguments are, whatever your justifications are, no matter how many buts and ifs and drivelling excuses you spout – they’re wrong. Nothing excuses these pictures, ex-friends, and nothing about them is funny.