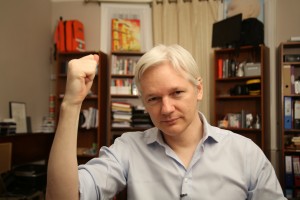 In Mexico City, thousands of students marched the streets in opposition to the election of Enrique Peña Nieto. They marched through the rain and the dark holding banners and chanting.  The movement is called Yo Soy 132 – Spanish for “I am 132.”  It is a pronouncement of solidarity that originated with the protest’s initiators.

Later that year, the Cambridge University student newspaper, The Tab, broke a story about their institution’s email accounts getting invaded by hacktivist group, Nullcrew.  They published these private details online along with the hash tags “#OpFreeAssange,” “#FuckThePolice,” and the saying “My weapon is my voice.  Time to raise yours.”  They stated that their actions were in an attempt to prove that “nothing is secure.”  Similar events occured at Yale and Oxford around the same time.

Six months later, Sydney University students and teachers formed picket lines at the entrances to their campus. They locked arms with members of educational unions. They shouted in opposition to reductions of staff by the university’s administration and cried out against the government’s cuts to tertiary education. This ‘education revolution’ came to a head last week, when troops of riot police retaliated and students were injured.

Directly or indirectly, Julian Assange influenced these protests.  He is the controversial founder of the WikiLeaks organisation and has been instrumental in changing the way the world thinks about privacy and institutional opposition.  “I think that it’s important, that even when you know you aren’t going to win the battle, to show some kind of resistance…  you’re not only setting a specific deterrent in relation to that issue, you’re also creating a general signal.”  Assange spoke to me through a muffled phone line with a disconcerting echo.  He told me it was because of a lot of poor quality phone interception.  It was midnight in London and, although he is often described as one of the most revolutionary individuals of our generation, he sounded tired and croaky.  The interview started off awkwardly.  For some reason, he started by asking for an introduction: “First of all, can you tell me a little bit about yourself?  How did you come to this position and why are you in it?”  He asked me if I thought the word “journalist” had been used a bit loosely in the past few years.  Julian Assange was showing interest in me and my life in true politician style.

Our conversation was on the eve of one of the USyd strikes.  A number of protests of this kind had been organised in the semester and they were reminiscent of rallies from the sixties and seventies.  As a public figure giving the term ‘direct action’ a completely new meaning, I was interested to know if Assange thought the tactics used by USyd students were archaic and old fashioned. “I think that’s because the institutional memory of protest is largely embedded in left-wing groups, like the various socialist parties, and they haven’t changed much in the last thirty years – put it that way,” he says.

In the United States and the United Kingdom, universities are being held accountable through more modern means.  Besides Nullcrew’s attack of Cambridge, hackers accessed the details of more than 43 000 Yale faculty, staff and students.  They did so through, what seems like, a very basic method – ‘Google dorking’, where Google search functions are used to access data on the internet.  Australia has seen very early stages of student hacktivism at the University of Western Sydney and the University of New South Wales but it hasn’t amounted to a ‘movement’.  Assange stated that the hackersphere was a new platform without enough attention or understanding by the general public to divert resources and legislative power towards it at this present time.  He also stated that in a university context, the measures taken against computer hacking are usually disproportionate to the harm that it produces.  In most cases, the damage is a reduction of prestige to a higher educational institution.  But Assange made sure to mention that, “if you do it, make sure you don’t get caught.”

For Julian Assange, his university life was very different to most.  His first involvement with university was via hacking – “in my early twenties, I was inside universities all around the world.”  But the more traditional university experience he had was studying a Bachelor of Science degree in physics and pure mathematics at the University of Melbourne.  It’s reassuring to know that even Julian Assange received pass grades in most of his subjects, but he dropped out of his degree after discovering a very perturbing connection between the Melbourne University Mathematics Department and the United States Defence System. “There was an oversupply of intellectual research… and a lack of political will to take the fruits of our intellectual labors and apply them,” Assange told me. This experience paved the way to starting WikiLeaks.

This connection struck a similar chord to Sydney University’s connections to unsettling organisations like coal seam gas companies and Chinese government and businesses.  Assange spoke of universities with a pitiful attitude – not only did he come across as though he was above it but he even said that going to university was a shock, “it felt like going into a nursery school because of its gentleness.”  But Assange was surprisingly realistic about these connections and argued that “all institutions are economically… and politically engaged with the rest of the world.”  After asking whether he thought that a university could function without external connections and thus having to succumb to the needs of these sometimes unethical organisations, he said,  “I don’t believe that any human institution or scale is able to disconnect itself economically or politically from the rest of the world…  [These connections] discipline them from doing really great things which are against the wills of the political and economic agendas, but they also discipline them from truly appalling things and going completely astray.”

Julian Assange spoke to me with the self-importance of a General leading a war.  In every answer, he made casual references to defence systems and national security sectors around the world that were overstepping their marks and how he had illegally seen inside the majority of them and knew exactly how corruptly they functioned.  Assange painted his enemy to me in an extreme way, using sensational words like ‘draconian’ on a regular basis.  The articles that have been printed recently in publications like The Monthly and The Conversation call Assange egocentric, irrelevant, and insular but there was no denying that he had a very captivating trait – continually trying to make me feel included and make me join his side just because I knew how to use the Internet.  Not only did he give an interview to Honi Soit – a humble, student newspaper with the independence to criticise the mass media – but he told me that he felt more comfortable speaking to people in the under thirty age group, “people’s perceptions of the world are becoming increasingly different, and that’s because of the differing degrees of Internet mediated political education.  For me, personally, I had more in common with people who are about thirty or under… because those people were educated by the Internet in a similar way to what I was.”

Yet his critics do have a valid argument.  While Assange has been stuck in the Ecuadorian embassy, he has been doing a number of talks to universities via videolink.  Events of this nature at Cambridge and Oxford attracted protests against the controversial WikiLeaks founder.  They protested for similar reasons – because an alleged sex offender that was hiding from justice was not welcome on their campuses.  Simone Webb, the organiser of the demonstration at Oxford told The Guardian in January this year, “It is particularly ironic that he’s been asked to speak at an awards event which supposedly celebrates integrity and the search for truth, when he is himself blocking the search for truth.”  When I asked Assange what he made of his detractors, he defended himself by saying that there were less than twenty people involved in these demonstrations and that if “you look at this politically, in Australia, students are extremely supportive of WikiLeaks – the organisation and the party – and me personally.”  He spoke about the Yo Soy 132 movement that was influenced by him and very defensively argued that “it’s just the UK, some parts of the US, and Sweden that we see [responses like the ones at Cambridge and Oxford].”

Nevertheless, the headlines and the front page articles about Julian Assange are nowhere to be found as he approaches ten months locked up in the Ecuadorian embassy in London.  When I asked him why he was so afraid of being extradited, especially when he knew that the majority of the world would be on his side, he very simply answered “I don’t believe in becoming a martyr.  The most effective activist is one who can work…  I don’t want to downplay the difficulties [of living in the embassy], but the US and its allies who are using the rule of law in order to crack down on WikiLeaks have placed me into a situation where I have nothing else to do but work.  I think the maneuver has backfired a little.”  Julian Assange was so optimistic that he came across as delusional.  This war that he has so nobly started is definitely not as strong as it was a year ago, but that’s not to say that this is the end.  Protest movements around the world continue to be influenced by the actions of Assange and WikiLeaks.  Whether or not all of this “work” that he is doing stuck inside a lifeless embassy will amount to landmark changes, is as unpredictable as his next move.