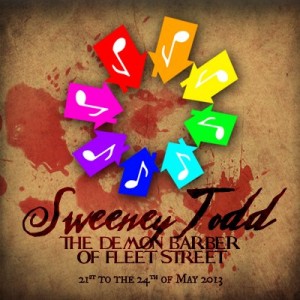 Sondheim’s cutthroat barber is based on an infamous Victorian character. An unlikely hero, Sweeney Todd made his first appearance in the 1847 stage production ‘The String of Pearls’, but modern audiences will know him through Johnny Depp’s performance in Tim Burton’s 2007 film. It’s a daring musical for any theatre or opera company to attempt, both musically and theatrically, and a bold move for the Intercollegiate Musical Committee.

However this production proved that a passionate, talented cast and crew can make up for any perceived lack of professionalism from an amateur company. Sondheim’s songs are a workout in diction, intonation and rhythmic precision but, despite a few mumbled lines and wobbly notes here and there, the leads handled them with ease and confidence. Two of the show’s most famous tunes ‘Green Finch and Linnet Bird’ and ‘Johanna’ were performed flawlessly by Owen Elsley (Anthony) and Sylvie Woods (Johanna).

Stuart Bryan handles the role of Sweeney Todd with maturity and sympathy – the latter being a quality most would not associate with a serial killer. But then the love-lost Sweeney is of course a complicated villain. Louise Flynn plays his paramour, the grisly baker Mrs Lovett as brassy and bold, although she would do well to amp up the silly irony in ‘By the Sea’.

The simple set design aids rather than distracts from the performances. David Tooby’s set pieces are enough to put us in Todd’s barber shop and Mrs Lovett’s pie emporium on Fleet Street. The costumes are not dazzling, but then anything too ornate would feel wrong in the small space of the Reginald Theatre. A well rehearsed orchestra added extra polish to this fine production.

Under direction from Melissa McShane and Richard Daley, the company has resisted the temptation to draw wholesale from Tim Burton’s Grand Guignol film and instead delivered a youthful and charming show.