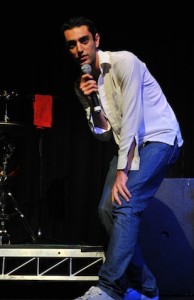 I feel this review requires a preface: Cyrus Bezyan’s comedy is, in every sense of the word, unique. Unique in that it is unlike anything else, it is utterly remarkable, and it could only be a product of his own eccentric mind.

As such, Cyrus Bezyan Interrogates Inanimate Objects for Approximately An Hour is just that: a man on stage talking to things. While at first this may not seem like the most compelling concept for a show, Bezyan’s distinctive brand of absurdist observational comedy renders even the most mundane object hilarious.

Ostensibly a noir whodunit about solving the murder of a sock, more broadly the show makes us examine our relationships with the things that structure our everyday lives. Part stand-up, part sketch, part experimental theatre this show is daring and hugely original.

The show would have benefitted from improved production values: Bezyan at times struggled to deal with moving fifty-odd inanimate objects, ranging from a glass of cranberry juice to a shopping trolley, on and off stage. However, certain factors were completely out of his control like having the worst A/V technician at the Factory Theatre, if not in Sydney. That said, the sheer audacity of the project, the strength of the concept and the quality of the writing made it all too easy to overlook any minor shortcomings in the stagecraft.

All in all, Cyrus Bezyan Interrogates Inanimate Objects for Approximately An Hour is not only far and away the best title of any show at the Sydney Comedy Festival (SCF), it also an absolute joy to watch. It is refreshing to see a young, up-and-coming comedian willing to take bold risks and eschew convention to create a show that dares to be more than just one man in front of his microphone. Having sold-out his first two performance and with a third added by popular demand, Bezyan’s debut SCF show was a joy to watch.

Michael Hing is an extremely self-aware comedian. In “Occupy White People”, a collection of musings on how incidental, accidental, and just flat-out racism has affected his life, Hing demonstrates an impressive ability to be in the moment despite having previously performed the show all around the country. At the start, he declared that he knew the show’s material so well, he couldn’t possibly fuck it up, a tongue-in-cheek act of braggadocio that was nevertheless proved true. With the bulk of the show’s material in several extended anecdotes, Hing still managed to improvise heavily thanks to a quick wit and a healthy dose of self-reflexivity.

The material was amusing and generally fit nicely within the show’s thematic concept, though when it didn’t – such as an incident involving a Dyson Airblade hand-drier – it was simply too good of a story to leave out. A slightly belaboured piece on his former puppeteering habits could have benefitted from being shortened and sharpened, though it was ultimately salvaged by some terrific interaction with an audience member. With a smile permanently displayed, it was clear that Hing was enjoying himself, an enjoyment that carried over into the audience. Highly recommended.

Forming one-half of the best Theatresports team in Australia, MotherFather, it would be easy to expect only brilliance from Tom Walker. However, his Sydney Comedy Festival Show, The Boy Who Would Be King, was not an hour of improvised comedy, but stand-up. Many comedians tend to only specialise in one, but Walker amply proved that doing both well can be done.

The show drew on the many events in Walker’s life that made him turn a new leaf – buying a fivepound tub of protein powder while blind drunk was a memorable example. Utilising a slideshow clearly made on MS Paint to great effect, Walker grabbed the audience’s attention and never let go. Unfortunately, the show ran behind schedule and the audience missed out on a chunk of material – but it seemed like they were all having too much fun to care. Polished, engaging, and incredibly funny, The Boy Who Would Be King showed that Walker is more than a great Theatresports host – he is a genuine comedian.

The Bear Pack
by Stella Ktenas 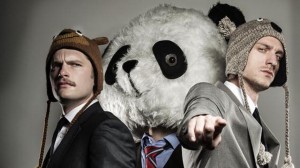 This duo was not only BEARable, but phenom(an)imal. By way of audience suggestions, Steen and Carlo transported us to a Magical Kingdom, a Tibetan soup kitchen, and many a tavern. We frequented Australia multiple times. Taverns and ducks were hilariously reoccurring in the multifarious tangents; and each tangent was integral in the telling of a story where in the end self-sacrifice superseded evil. We met a Russian named Yurick, an egg-laying Duck King, Trevor, an ogre and a man able, with the power from three stories, to wave people to slumber. We marvelled at the immense utility knowledge of tying a thousand knots from a fish produced, and Carlo’s recitation of a poem, in iambic pentameter no less, was spectacular. The professionalism exhibited in the weaving of stories into existence, and ability to riff off simply a raised brow or slight movement could only have come from years of development; truly a tremendous pack of entertainers.

James Colley runs the weekly stand-up showcase Get-Up Stand-Up at Manning Bar. He has been doing Theatresports and Project 52 at Uni since most of us were in high school. He is also a big hairy kid. He says as much in his show An Ape That Thinks He’s People.

Colley takes us from Colonial Australia to his own life of crime as he explores what it is to love, lose, dream, create and sell your blood to pay rent. He does this from within the confines of a repurposed shipping container. The show is a work in progress, and some sections lag, but is considered, touching and funny in equal measure.

He looks at our world through the eyes of a child. His continual sense of wonder, his ability to see the extraordinary in the ordinary, and his sharp wit make him, and his show, a pleasure to watch.

There is a moment of suspense when any comedy act takes the stage, when the audience fears that the following hour will be filled with polite, not-wanting-to- hurt-their-feelings laughter. It took them two (maybe three, give or take) sentences for us to decide that that wasn’t going to be the case.

The show was fantastic. It built a momentum with an incredible range of improvised skits, with a solid mix of audience contribution. The show just came off as genuine: the best bits involved the little pauses where they weren’t sure what to say next, and came up with incredible saves. I won’t ruin them for you, because I’ll say (at the risk of sounding too impressed) that you should see them for yourself. Friday. Factory Theatre. $15. Go.

As National Theatresports champions, Tom and Bridie  were awarded their very own title belt. According to Tom: “I don’t know how long we get to keep the title belt for, as it is literally held together by duct tape.”

“Basically it was a theatresports show (separate from the stuff we usually do, which is called longform: this is improvised “games” of 1-3 minutes that 5 judges then give ratings of 0-5, the stuff you’d see at Manning) for the title of Theatresports Champion of Australia. NSW hasn’t won since 2005.” Bridie and Tom were clear winners in front of a massive crowd at the Enmore theatre.

Tom says, “art is art and ranking it feels weird, but we were the funniest on the night and hopefully it’s something to make people who’ve only experienced improv through theatresports sit up and take notice.” So head along and catch them on Friday night, or at Project 52, every Wednesday night from 7:30 at Hermann’s.
Rights! Comedy! Action!
by Georgia Kriz 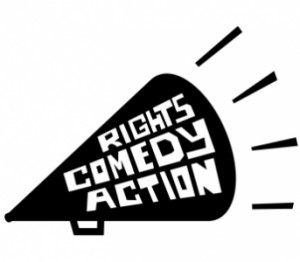 If the line-ups at comedy festivals and the faces on television were anything to go by, you’d be forgiven for thinking that funny women were an endangered species. Ladies are criminally underrepresented on the comedy scene – the prevailing assumption seems to be that one has to have both an X and Y chromosome to get the funny gene.

It’s comics such as Judith Lucy, Alice Fraser and George McEnroe who are proving the sexist comedy world wrong, one menopause joke at a time. They, along with other big name acts like Claire Hooper and Wendy Harmer, had the crowd in stiches for the best part of two hours.

It was knee-slapping, side-splitting, bladder-straining good fun, and there was not a male comic in sight.

On an absurdly tiny stage built into a converted shipping container, Fricker haphazardly and sarcastically jolts her way through a series of stories and songs about her life: that time she dated the “Gypsy King of Canberra”, that time she was sexually harassed by a dugong, that time she shat her pants in public.

It sounds like it should be the stuff of genuine LOLs, right? Unfortunately not – most of the big laughs get lost somewhere in between her too-cool-for-school strut, disingenuous self-deprecating asides and general badass attitude.

On the plus side, she has a stellar voice and plenty of energy; her songs are great. All the show is really missing is a little humility and vulnerability from Fricker; it has serious LOL potential.

This year, for the first time, the Sydney Comedy Festival included a Jewish Comedy Showcase as part of its line-up. Dave Boustein, Jeremie Bracka, and Peter Meisel each took to the stage for a short set featuring the usual Jewish fare of holocaust jokes and gripes about overbearing mothers. Dave Smiedt also did a serviceable job as the master of ceremonies, alternating between flogging camel-toe camouflage to the audience and imaging a world with a gay pope (Pope Fabulous the first who chose as his favourite hymns, “Him and him and him!).

But the man I want to urge you all to go out and see immediately is Sol Bernstein, the headline act. With foul-mouthed audacity, he tackled a whole host of controversial topics from the Jewish deicide (Look, we didn’t kill Jesus. I’m telling you we didn’t touch a hair on his head. We may have sold them the wood…) to the veiling of Muslim women (There’s a big debate in England at the moment about whether Muslim women should have their faces covered. Let’s face it, some of them really should.)

At eighty-four years old, he may not be long for the world (as he kept reminding the audience), so catch him while his still breathing and do it soon.