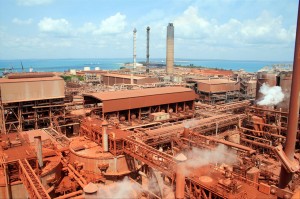 Over the last ten years, nearly all of the prestigious Group of Eight universities have received a donation, investment, or contract from one of Australia’s large mining companies. BHP Billiton funds two Professorial Chairs at the University of NSW. Monash University has formal partnerships with MMG Limited and Newcrest Mining Limited. British Gas, Arrow, and Santos support the Centre for Coal Seam Gas at the University of Queensland.

The University of Sydney, meanwhile, has been home to the Rio Tinto Centre for Mine Automation since 2007. The Centre, under the direction of Dr Steven Scheding, received $21 million from the international resources corporation to develop automated open-cut mining equipment.

“We’re working under a contract with Rio Tinto,” said Dr Scheding. “This means that certain outcomes are desired… [and] we do our best to make sure that we’re aware of their imperatives.”
Dr Scheding said that the Centre is in daily contact with Rio Tinto, but that they’re also strongly aware of their obligations as University employees, educators, and researchers. “It’s about reaching a compromise amongst competing demands.”

But SRC Vice-President Amelie Vanderstock said that mining companies should not be allowed into positions that allow them to place such “demands” upon university staff and resources.
“The University of Sydney is not a poor institution…It should pick and choose its investors so that we’re getting money from sources that are ethical, that don’t taint our reputation, and don’t compromise our independence.”

She said that mining is becoming such a large stakeholder in the university that it curtails the its ability to produce independent, innovative research.

“Mining companies invest in universities so that students get exposed to them, and then end up going to work for them and doing research that helps them,” she said.

“That creates this endless cycle of cooperation and support for mining companies. It’s hard to break that cycle and break into new, sustainable technologies and ways of thinking when the thinking, the research and the future workers are all coming from institutions that support mining and the status quo.”

The mining industry is also present in University’s investment portfolio. The University of Sydney holds a 25% stake in AcuMine, which is described on the company’s website as working “ to commercialise innovative products developed for the global Mining Technology and Services sector.”
A recent campaign by the Australian National University’s student environment collective compelled its management to divest itself of its shares in MetGasCo, a New South Wales mining company. Amelie said the USyd Environment Collective plans a similar mobilisation against AcuMine.
But with mining companies still earning billions of dollars in profits every year, it seems unlikely that under-funded universities will stop trying to derive their own profit from the mining boom anytime soon.

Indeed, a recent announcement by Narara Valley High School on the Central Coast of an official partnership with Nucoal Mining suggests that mining investment in universities is just the beginning of a much larger, longer project.