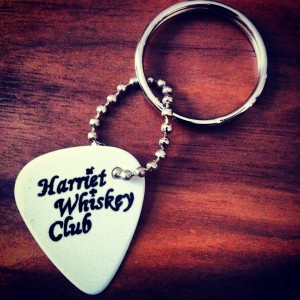 Give us an intro on who you are.

We aim to play rock and roll but we bring country and blues influences into the writing process too. Charlie Forster-Anderson is the lead singer and rhythm guitarist. Bernard Ross is on drums, Will Franklin on bass, and Will Naughtin-Dent is our amazing lead guitarist.

What do you do outside of Harriet Whiskey Club?

Charlie is a Sydney Uni Arts old boy but now studies a JD at UTS. Bernard is currently at Sydney Uni studying a Masters of Professional Accounting, and William Franklin is at the Conservatorium studying composition.

How did you come together to form a band?

Bernard and Charlie have been friends for many years since studying music history together at Sydney Uni in their previous degrees. They have started about three or four bands together but this is the first one that is actually getting some attention. Charlie met Will and (the other) Will through some mutual friends brought the four-piece together to start playing shows and recording.

Is it confusing having two Wills?

Yes and yes (one yes for each Will). We have tried some nicknames like Frankie and Naughty or Dent but none have stuck. We’re just going to have to keep getting confused for our whole careers I guess.

If your music could be the score to an imaginary film, what would the film be about?

Probably an old western film with lots of cowboys and Indians would suit our music. We love horses and cowboys and mountains and whiskey and things like that. We’d also love to see our tunes against some crazy extreme footage like extreme skiing or base jumping. Hook us up, filmmakers!

Do you take inspiration from things outside of music?

We mostly take inspiration from real life experiences. Relationships are usually a big influence in our songs, losing friends, girlfriends, you know, all the usual songwriter stuff. Sometimes little things about religion come into our songs as well.

What process do you guys go through in recording?

It’s probably a little different to most Sydney bands at the moment. We refine our sound in a live scenario, press record and whatever we play goes on record. You can really hear this ‘rawness’ in our recordings as it sounds like you’re listening to a live band playing in a bar, just without the sounds of people yelling and glasses breaking, etc.

Harriet Whiskey Club’s next gig is on Thursday, May 16 at FBi Social. Their first single, ‘Fake Take’ from their forthcoming EP, Geronimo is now available on iTunes and Spotify.