“I’m not homeless, I’m just down here to have a smoke,” says a forty-something man, with uneven stubble, refusing to make eye contact throughout most of the conversation. My partner for the Street Count was on a first name basis with the man, and they cheerfully bantered for a couple of minutes. He seemed aware that neither of us believed him when he said he had a place to sleep, but at the same time, he was reluctant to discuss the matter any further. 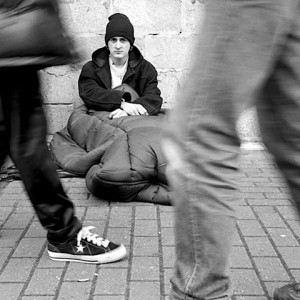 There was something else that was evident throughout the short chat we had: he wasn’t stupid, and far from it, just “troubled”, as my partner put it after we moved further down George Street. He wasn’t lacking wit by any measure, making humorous jibes at me and my partner for doing volunteer work at 2am.

“I’m fine, though, I’ll go upstairs after my cigarette”.

When we walked back up the street an hour later, the man was asleep on a mattress half a block up the road.

While there are hundreds of rough sleepers in Sydney, the reality of the number of those in a permanent state of uncertainty is barely visible throughout the day, and even most hours of the night. There’s a myriad of organisations that offer rough sleepers a place to have daily showers as well as utilities to wash their clothes with. When you walk through the CBD, chances are you’ll see less than ten homeless people – hardly representative of the real issue.

Although the latest street count showed the number of rough sleepers having fallen from 310 last February to 269 this February, the City of Sydney results posit that “the number is expected to rise this winter as two of the main ‘street-to-home’ housing initiatives reach capacity.”

The numbers are hard to picture because chances are, when you walk through the CBD you don’t notice anywhere near 250 homeless people. You’d probably be hard pressed to see more than 10.

In a way, this pushes the issue of homelessness to the backs of the collective mind of most Sydney citizens. There are charities and organisations that exist to combat it, but there isn’t the bulk of volunteering and government aid to reduce and eventually eliminate those without a place to sleep in Sydney.

On a hypothetical level, if a person were to walk through the city and see the amount of rough sleepers that inhabit it in the early hours of the morning, the resolve for community action would be far greater and significantly more constant.

The issue is also ignored for a reason that exists simultaneously with the invisibility of homelessness, present on a more psychological level.

In reality, a single person can’t give money to every homeless person they see, and in response, many enter a state of forced ignorance, pushing the issue of homelessness to the back of their mind. You might convince yourself that “they’ll just spend it on drugs or alcohol” or that “they’re unable to change their circumstances with a dollar”.

This isn’t consistent with reality. The highest cause of homelessness is domestic and family violence, followed by financial and housing stress, with drug abuse and alcoholism often being a result rather than a cause.

In 2012, the Homeless Persons Information Centre (HPIC), which caters to approximately 160 people a day seeking urgent accommodation, received 58 664 calls for assistance. Out of this, 45 448 were unable to find anywhere to sleep, and were calling in regards to that. Over 6 000 of these calls came from single parents with children.

On a quantitative level alone, the HPIC data shows that homelessness continues to be a severe issue in Sydney. The widely perpetuated view of homelessness as a temporary issue, along with a perception of the homeless as ‘addicts’ or ‘low life’ characters unable to change their circumstances, is far from reality and exists as one of the major barriers to combating one of Sydney’s most pressing issues.