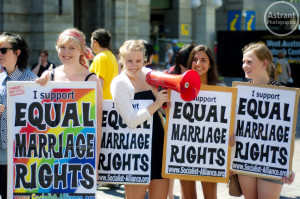 Australia was given reason to celebrate after it was recently announced that the NSW government had the power to legalise same-sex marriage. If it passes, it could trigger a domino effect and see marriage equality spread to the remaining states and territories.

Premier Barry O’Farrell has become the first Liberal leader to allow a conscience vote on the issue, and sets an example to be followed by those at the national level.

Australia is following a worldwide trend of states being the first to legalise same-sex marriage, which forces the hand of federal governments.

There is a chance, however, that the bill will be appealed in the High Court on the grounds that it is unconstitutional, as the Commonwealth Marriage Act defines marriage as union between a man and a woman.

An amendment would be needed to broaden the definition to include same-sex couples. This is why, despite small successes at the state level, same-sex marriage remains a high priority for voters going into the federal election.

Kevin Rudd’s highly publicised backflip on same-sex marriage has seen voters flock to him. Of 1000 people recently polled, 30% of them are more likely to vote for him now that he is pro-same-sex marriage. That number is even higher at 50% for the 18-24 age bracket.

Yet, regardless of Rudd’s personal views and a pro-same-sex marriage party platform, there are not enough members of the Labor party who share this view to pass a bill. The National Platform of the ALP has also enforced the conscience vote, meaning Rudd cannot bind the party to a position on same-sex marriage.

A bipartisan conscience vote is proving to be the only viable option for the federal as well as the state government. As an alternative, a referendum would inevitably spark a campaign of fearmongering from anti-LGBTIQ activists, which is undeniably a step backwards.

This is an important reminder to voters that in September we will be voting for a party, and not for a personality. Kevin Rudd’s opinion on same-sex marriage is just that, his opinion. He will not be more successful just because he is of a certain conviction.

Former Prime Minister Julia Gillard, although publicly against same-sex marriage, was in favour of holding a conscience vote during her time as leader. This means that same-sex marriage bills would have had equal chance of passing under her as under Rudd.

Tony Abbott’s refusal to allow his party to participate was the only reason the vote did not go forward. Although Abbott’s views have not altered in any way since then, he has stated that after the election it will be up to the party to reconsider its stance on the matter.

As an increasing number of Liberals become openly pro-same-sex marriage, a change in party policy is certainly not out of the question.

It is highly likely that we will see a conscience vote held under either government, regardless of the opinions of highly-placed individuals.