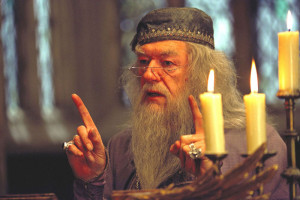 Dumbledore may have been critical player in the defeat of Voldemort, but let’s be clear, as the administrator of an educational institution, his managerial skills were, by every objective measure, severely deficient.

Let’s ignore the blatant lack of safety regulations and enforcement mechanisms to prevent his students, under his duty of care, being mauled by three-headed dogs, violently aggressive trees and questionably structurally sound staircases.

Instead, his hiring regimen requires assessment. In the past seven years, Dumbledore has hired two Dark and demonstrably homicidal and insane wizards for the same post, Professor Quirrell and Barty Crouch Junior. Another, Professor Lockhart, was an inept fraud and serial mind-rapist.

Even his less outrightly dangerous hiring practices should be questioned; Hagrid is by every measure negligent in his teaching standards, resulting in one student being mauled by a giant avian creature, and he later exposed his students to the results of his highly illicit genetic experiments. Similarly, Dumbledore uses Hogwarts resources to fund the employment of Professor Trelawney, Dumbledore personally believes to be a total fraud, in the unlikely event that said teacher might one day make a genuine prophecy. Dumbledore reveals a startling lack of concern over Professor Snape’s evident  favouritism and sadism, whose bullying of students should have resulted in disciplinary actions years ago.

Finally, Dumbledore himself exhibits a startling amount of favouritism, for instance awarding Gryffindor an arbitrarily large amount of points at an end-of-year celebration resulting in a House Cup victory over Slytherin. The fact that Slytherin is filled with students suffering from narcissism and psychopathy is not an excuse for such behaviour, and is rather further evidence of Dumbledore’s total inability to manage the House system.

Dumbledore is objectively a substandard headmaster who warranted immediate replacement at every stage of his career.