Coleridge foretold our future in the lines, “Water, water, every where, / nor any drop to drink.” The oceans have been slowly warming in recent decades.

This year Arctic temperatures were 1-3 degrees Celsius above average, and thousand years old methane frozen on the sea bed is starting to bubble to the surface in plumes. The Arctic is melting.

A shallow lake now resides in the Arctic, recorded by the North Pole Environmental Observatory since 2002, and this year’s winter ice coverage has been documented as the sixth lowest since 1970’s satellite observations. This Arctic lake is a warning siren of an increased loss of sea ice, a loss of habitat for polar bears and seals, and an increase in sea levels. An eventual erasure of ice will lead to environmental disasters for all species which inhabit the globe. 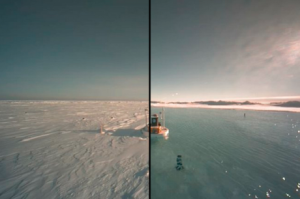 This Arctic investment has been estimated by Lloyd’s of London at $100 billion in ten years. Yet this number pales to the astronomic cost of this catastrophic future.

Imagine $60 trillion. This is the estimated cost of the release of methane from the thawing permafrost beneath the East Siberian Sea. Nature published an article exposing the calamitous, economic costs of a warming Arctic; warning us the cost will be far greater, as the region is critical to the Earth’s oceanic and climate operations.

A 50 gigatonne reservoir of methane exists on the East Siberian Arctic Shelf, were it to be released into our atmosphere we would be doomed, as a higher methane concentration in the atmosphere accelerates global warming, exponentially increases local changes in the Arctic, and even reduces the reflection of solar energy and retains solar heat for longer than CO2.

Inevitably the costs of a melting Arctic shall be borne by developing countries, suffering extreme weather, experiencing poorer health, even lower agricultural production affected by a warming climate. Though all nations shall eventually feel the grave affects.

It is for our benefit to alter this and to our detriment if we remain ignorant to it.