It occurred to me the other day that unlike American Apparel, it is not widely acknowledged that Vice Magazine is sexist. I worked this out because I was at a party and I said, “Do you know what I hate?” (my preferred method of party chat; yes, don’t invite me to your parties), to which someone in the vicinity replied, “What?”

“Because the only women it features are prostitutes, half-naked or half-naked prostitutes. I have the same gripe with American Apparel.”

At which point the girl rolled her eyes and said, “Oh yes, everyone has that gripe with American Apparel.” Well then, I thought, everyone should have that gripe with Vice! The next day, I logged onto Facebook and noticed that 23 of my Facebook friends had ‘liked’ Vice Magazine. I found this disturbing, particularly after comparing it to my friend who proudly noted, “None of my Facebook friends ‘like’ Vice.” and then suggested that this would be a good reason to cull people. I nodded but did not heed her advice. My friends are good people! Maybe they just hadn’t realised that Vice Magazine was sexist? After all, not all its content is sexist. For example, I found one article which deals with the rape in a pretty sensitive manner. Even so, I found several articles which were offensive and derogatory to women, all of which promote being a self-absorbed and immature twat.

Take for example Vice’s article ‘Help Put Strippers through College’, written by a man who looks like this: 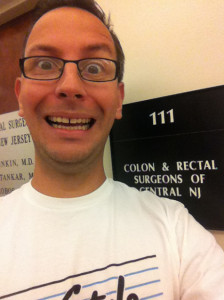 He looks like a fun guy! He doesn’t take himself too seriously because he’s making that ridiculous face, and he must be ‘edgy’ since he chose to photograph himself in front of a sign about colon and rectal surgery. This man is in a bind. He needs an assistant to type up his work but is adamant that “I REFUSE TO LET UGLY PEOPLE TYPE MY WORK!!” Woah, okay. That seems like an extreme reaction. So then, instead of looking up typists on Seek.com or whatever one does when they’re looking to hire an administration assistant he goes to an “amateur porn site…where you can pay ‘the girl next door’ to perform nearly every manner of naughtiness”. At this point, he reminds us that he’s actually a loving, respectful husband because he mentions his “sex kitten at home” which means that he “no longer needs an assistant for sex, but at nearly 40 I really need someone hot to type for me.” Sure, fair. A man has needs, and if he’s forty and still writing for Vice magazine he can afford to pay someone to satisfy them.

He then gives a sample of the “amateur cam girls” at his disposal. The first is a “mother of two willing to perform nearly any act to make her dreams come true”. The second is a college student who gives whip-cream blowjobs and caters to most fetishes. She wants to pay off her college loans. The third is a stay at home mother of two who will “give a ten-minute-blowjob camshow for $55”. She needs the money because “my ex-boyfriend was abusive, a cheater, an alcoholic…I felt ugly, useless, and was lacking any real confidence.” The fourth is only nineteen. She writes, “It’s been rough…My brother would call me a whore when I was 12 because I was raped. My parents wanted to take me back to where I was raped to see if it would happen again.” Finally, the last girl is disabled and her most requested video is “to have her dog lick her pussy”. Asked what she’s saving up for she replies, “I’m saving to survive! [sic] I have a 14-month-old son…Also a tornado hit my car.”

Here the article abruptly ends. This was mostly a relief because I felt uncomfortable with his merciless mocking of underprivileged and desperate young women. I felt like these women should be sent to a women’s shelter. He felt like they should send him half-naked photos of themselves holding up signs which boast their typing prowess. Here is a photo of the nineteen year old rape victim: 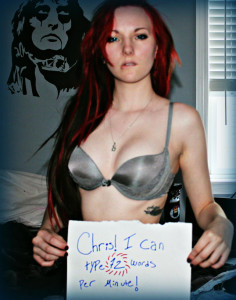 Now consider Vice’s ‘Fashion’ section, which reads like a series of American Apparel ads minus the minimalist backdrops. Vice has published an article about ‘Garbage Girls’. The main problem I had with this article was that it promotes the lifestyle of a small child living in a pigsty as valid for cool, I-don’t-give-a-fuck types to adopt as adults. Indeed, some of these girls live at home and still refuse to pick the old pizza boxes and wine bottles off their bedroom floors. Another has romanticised her mess as a concept: “I like having everything out in the open where I see all of my things living happily together.” But I digress. This article is about sexism and that article is complemented by a series of photos of these ‘Garbage Girls’ lolling about in their natural habitats. They are half-naked, made up and seductively pouting at the camera. They are also literally stewing in their own filth: piles of clothes, dildos, Penthouse magazines, tape players, rotting food and My Little Pony figurines.

Finally, I would like to draw attention to an article on Vice which talks about men because you might be arguing, “Rah rah rah Vice also publish things which are degrading to men and which feature unflattering photos of penises.” Well here is an article written for Vice by a woman about men: ‘Maybe I’m a Chubby Chaser’. Maybe, I thought, this article will contain photos of obese men with their genitals hanging out, and maybe the female author will write degrading things like, “I want to cum all over his man boobs”. But, alas, no. This article actually celebrates men in the sense that it promotes the desirability those who are often marginalised for being overweight. Also, the associated photo is so tasteful we are offered not even a glimpse of flesh. It is a photo of a building. 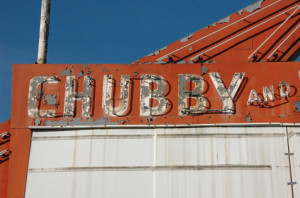 Well that’s cheating! Because now we have a photo of a naked man, but there are also two naked women, dressed as animals in high heels and one of them is holding his penis.

Now I showed this article to a friend and she argued that I was missing the point of Vice. She believes that Vice “both parodies and indulges” its sexist image in a way that American Apparel does not. Yet such an interpretation, I feel, is giving Vice more credit than it deserves. Vice’s tongue-in-cheek tone should not be mistaken for clever satire. Its tone is a key element of its brand of studied irreverence, a cheap imitation of the avant-garde which does nothing more than push the limits of vulgarity.

In this light, Vice’s notorious stunt of sending Dennis Rodman to North Korea was perfectly in character. Again Vice was being facetious and self-absorbed, putting at risk the US’ diplomatic relations with a country which later threatened a preemptive nuclear attack. Again Vice was pushing boundaries for the sake of pushing boundaries and, as with those mores that dictate equal respect for men and women, these were not boundaries that needed to be pushed.