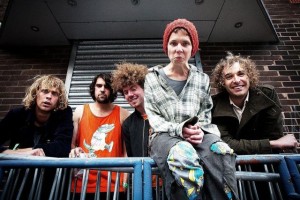 It’s nice to hear something different, and something different is what I heard. Pond is a five-piece psychedelic rock band from Western Australia and with Hobo Rocket’ they’ve made a fierce, lean record of shifting tempos, infinite delay effects, and cacophonous live energy. It’s the latest step in a rapid progression from jokey lo-fi home-recording outfit to a fully realised band with a complex and distinctive sound. Speaking with Joseph Ryan, a member since debut Psychedelic Mango (2009) was recorded in a living room, it becomes evident that the band’s vastly more cohesive and purposeful sound remains rooted in the DIY feel of their earlier releases.

For starters, the band recorded in three days. With countless side projects and commitments, getting all members in the same room proved tricky, thus recording was a matter of “slap up all the mikes and [record] live” says Ryan. Forget keeping instruments separated in the mix, there was “no chance of that” given the hasty schedule, and the net result is a ragged, monolithic ensemble sound where instruments don’t so much play individual notes as contribute a new tone to the greater ruckus. Given the wiggly time signatures and tonal shifts, recording an album of such complexity in less time than many spend on one song is quite a feat indeed. Right from the opener ‘Whatever Happened To The Million Head Collide’ the sound forgoes the crisp lushness of last year’s Beard, Wives, Denim. Instead it resembles a kind of space-rock Exile on Main Street that one would struggle to reproduce with the painstaking soundwonkery that characterises most modern recordings.

Most memorable is the title track. Over a Velvet-Underground-in-space drone we hear the semi-coherent rumble of a broad Aussie drawl intoning phrases like ‘star rider’ and ‘what drugs are you on?’ This is Cowboy John, a ‘sort of mystic poet fellow walking around Perth’ according to Ryan; “he’s a bit strange…I don’t know what he does actually”. Apparently while mastering the song, the mystic poet paid a visit and it was decided that the existing vocals, which were ‘nothing really too special’, were best replaced by some inspired improvisation. The weird and brilliant result is a near-tuneless recitation of Cowboy John’s own songs over Pond’s glistening into-the-void-ism. It’s a great blend of off-the-cuff strangeness and proggy ambition, and a helpful reminder amidst their darkest songs of the sense of fun that underlies everything they do.

Finally, a note for the useless: Pond is NOT Tame Impala. “You read interviews and it’s always…in the first line: Half Tame Impala” says Ryan, “and it’s like…how many years has this been going on now?” While Tame Impala’s live outfit does currently share a few members with Pond, the studio tracks with which most people are familiar are almost entirely the product of Kevin Parker, a non-Pond member. Ryan concedes that the latter’s success helped other bands in the Perth scene get exposure, but also led to both bands being grouped “[under] the same sort of banner” when “there’re not really any similarities”. That last bit might be a stretch – they’re both psychedelic rock bands with a love of fuzzy, delayed guitars – but Tame Impala’s is a plaintive and insular dreamscape, while Pond sneers and stomps; it’s an eclectic and light-hearted affair with a healthy love for the absurd and funky.

That’s the key, the sense of fun that remains even as they take a turn for the sinister. Ryan summed it up nicely: “if you’re honest and happy making your music, you can hear it…it’s never gonna work if it’s not for the fun of it, not with Pond, anyway.”