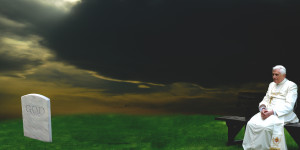 Following a string of unprecedented announcements over previous months by the newly instated Pope, from embracing gays within the Church to implying people of other faiths can still find their way into heaven, Pope Francis stunned the world this week with his frank admission that it really doesn’t matter what you do, because we’re all just spacedust sitting on a rock hurtling through an otherwise barren universe, and for all we know there might not even be a God.

“Where’s the proof of this all mighty spaceman?” he posed to surprised onlookers as he emerged from his new pope-mobile, a second hand VW Kombi with 3 months rego. “I just find it hard to believe that he could one day be sending plagues and turning people into piles of salt, and the next he’s just gone completely silent,” mused Frances. “Are we seriously supposed to buy that? Even if we overlook the clear misunderstandings of basic chemistry, it all seems pretty far fetched to me.”

Sources within the Vatican have suggested Frances is just the latest in a string of Popes who made the fatal mistake of actually reading the Bible. “It was the same with Benedict, you know,” reported Reverend Philius on the condition of anonymity, “he barely even made it halfway through Leviticus before throwing in the towel. The bit about bowlcuts being a sin always gets them.”

Prior to his latest surprise announcement, Frances had been reported missing to authorities after it was discovered he had not returned to his tent in St. Peters Square for three consecutive nights. When later quizzed as to his whereabouts, Francis simply replied that he had “Taken some time out of popeing” to “reconcile my belief in the church with the fact that since becoming Pope I still seems to be inexplicably human and no more connected to God than a tuna sandwich.”

It is as of yet unconfirmed if Frances will also scrap the Church’s most controversial policy, the opposition to the use of condoms to stem the spread of AIDS. Sources within the church indicate that the Vatican is well on track to its inhouse goal of seeing 30,000,000 people in sub-saharn Africa infected with HIV by 2020, and certain parties feel it would be a shame to get so close only to pull out now.