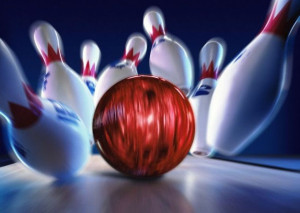 A Strathfield man was yesterday celebrating his first ever turkey in a game of tenpin bowling. Garth Funkel, 23, achieved the feat at the North Strathfield AMF Bowling facility, mildly impressing co-workers forced by upper management to endure the so-called bonding exercise.

A turkey is the term given to three strikes in a row in bowling, something Funkel had come close to many times but never achieved. “I’ve only bowled two successive strikes before, and that usually draws the attention of a couple of bowlers,” Funkel said. “But it really doesn’t compare to the scattered applause and half-hearted smiles a turkey brings.”

“It’s an achievement I’ll remember for the rest of this week.”

Co-worker Dane Mustaive was in awe of Funkel’s accomplishment. “I couldn’t believe it when Garth told me he’d bowled two strikes before,” said Mustaive. “I thought only middle-aged people and their kids did this kind of shit.”

Mustaive added that the turkey was the definite highlight of the night, before winking several times in this reporter’s direction.

For Funkel, it was a brief moment in the sun, with a co-worker’s Borat impression quickly stealing the spotlight from him. Yet he remained adamant that he would never forget the faces of the “3, maybe even 4” employees who looked like they had demonstrated a most cursory interest in the proceedings.