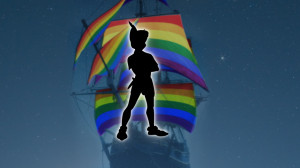 Oh lawdy, this was fun. To all those who skipped Queer Revue for a night out, ye made a grave mistake! Thanks to the talented cast of Peter Pansexual and Friday’s cheery audience, my night with Queer Revue was the perfect combination of good vibes, 2am Arq dancing, hilarious insights more akin to an Amanda Palmer performance than a revue, and the whimsy of a Mighty Boosh box set marathon. I left the Revue with an acute feeling that, compared to the previous two hours, I, the world and everybody around me was living in 2D. The point Queer Revue made so well is that compared to “Never Never Having to Define Your Sexuality Again Land”, we most definitely are.

The best thing about this revue was that it never shied away from the political opportunity and implications of having a queer show. Unlike faculty revues, where the hodgepodge of skits often provide laughter equally interspersed with offended intakes of breath, Queer Revue’s proud positioning outside ‘the normal’ (arts students read: hegemonic heteronormative shithole) provided thematic consistency between skits as well as a massive breadth of material. Where is Fran ‘The Nanny’ now? Where do you hide your bits when performing drag? What would North K-Pop be like? What happens when you invite your secret lover home for “seafood pizza”? These questions and a helluva lot more were answered in a rollicking combo of satirical ballads, perfectly pulled-off dance routines, professional videos, and the sassiest nudity scenes I have ever witnessed in a revue…or elsewhere. Special mentions go out to the ecstatic pair of dancing testicles, Sir Ian McKellen as ‘Glamdalf’, slashed Jane Austen, and ‘that’ accordion player.

Still, this year’s Queer Revue was hands down the most enjoyable Revue I have seen. Rather than a ‘show’ the word ‘celebration’ comes to mind, and as an audience member I walked out of the Reginald feeling sincerely privileged to have been involved.