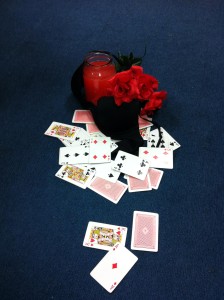 “Kings Cup?” somebody suggested, as we sat around our candlelit dining table, working steadily towards the bottom of a large bottle of whisky.

“Sounds good,” I said. It was early in the evening, and although none of us knew what lay ahead, there was, even then, an unmistakable air of anticipation in the room.

For reasons unknown to all but the most drunken minds, we migrated to the carpeted floor, taking with us the whisky and a selection of candles. I fetched a deck of cards, and we began to play.

Kings Cup is a disgusting game that pairs the drawing of cards with excessive drinking. It requires the mixing of everybody’s various liquids in a central cup, to be consumed by whoever is unfortunate enough to draw the King card. A rule is set for each card, and rules can also be invented throughout the game.

Spurred on by unspoken, yet viscerally palpable, sexual tension, we tentatively agreed to this rule: take off an item of clothing every time you draw a card that is a prime number.

Excluding the ace and royal cards, that’s a lot of numbers: two, three, five and seven.

From the outset, it was clear that everybody in the room was a little too into this rule, with the slow shedding of clothes proving tantalizing to the extreme. We pretended to be thankful for our socks, watches and singlets, but in actual fact, we wanted them off — and fast.

Before too long we all sat, fully naked, on the floor of the living room. Somebody made an excuse to move to a bedroom under the pretense of it being warmer in there, and we abandoned the game before it had ended, leaving the half-full King’s Cup on the floor.

At this point, the pretense that we had any ambitions other than fucking met a necessary end. Our minds were fuzzy with whisky, but not too fuzzy to altogether disregard consent, so a brief conversation took place:

Were we all comfortable with doing this? (Yes.) Did the couple involved want to talk about it before it happened? (They already had, they wanted it.) Was everybody sure? (Yes.)

And so it began.

Although the cheap Ikea double bed was reasonably crowded, it was not the awkward entanglement of limbs I might have envisaged prior to actually partaking in a foursome. In fact, the most surprising part of the entire affair was that it was not awkward at all.

For the most part, we divided into couples, initially switching between them every couple of minutes.

I was overcome with the confusing combination of genuine passion for the people I was fucking and alcohol-fuelled lust. As the sex progressed, we switched couples less frequently, sharing increasingly intense moments with one another until we were actually making each other come.

Cunts, curves and lips abounded, and hands explored freely; as we discovered post-foursome, deeply secret desires were being acted on for the first time.

I awoke the next morning, alone in my own bed, thoroughly confused over whether or not it had been a dream. I obtained my confirmation when I ventured out into the living room.

Piles of clothes occupied the very spots the four of us had occupied ten or so hours earlier. Littered on the floor was the empty bottle of whisky, toppled onto its side, beside the burnt-out candles.

It was a sobering scene, but surprisingly, one that invoked neither awkwardness nor regret. It was my first foursome, but I hope it won’t be my last.