After a decades-long search, the writing’s finally on the wall for infamous fugitive Bill Posters, who faced trial earlier this week at a Sydney local court.

Posters originally denied all charges but was nailed to the wall by an extensive paper trail. “The Crown Prosecutor just cut him to shreds” reported one court observer, “Bill just folded under the pressure.” Following critical admissions on the stand, the prosecution flattened an already wooden defence.

Posters maintains that he is innocent and claims that police and prosecutors have colluded to frame him. According to documents filed in court today, Posters alleges that Detective Rock and Sergeant Scissors beat him to a pulp while in custody. 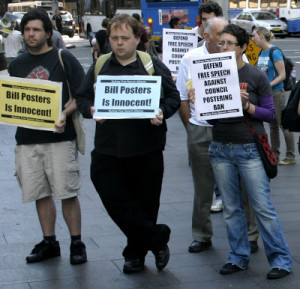 After initially refusing to comment, Salamanderown Local Area Command released a statement that “on October 12 an incident occurred involving persons believed to be persons and a collision-based escalation.”

The public is torn over the prosecution of Posters, known for his support of local music and shitty nightclub nights. “It’s not a black and white issue,” explained local music expert Mala Informé, “like, in some ways knowing about the events at Oxford Arts Factory is cool, but then everyone knows about them, and then it’s not.”

Particularly devastated were Bill’s aged parents; upon hearing the verdict his mother was visibly cut up, while his father crumpled to the ground.

Poster’s barrister has indicated that they will appeal the decision, dismissing the evidence against his client as “paper thin”. “I am confident that these charges will not stick on appeal,” declared Thomas Pompingdale-White SC, with his characteristic lisp. “My client deserves to be A 3 man once more.”