The USYD branch of the Community and Public Sector Union (CPSU), the union that represents general staff, has broken from the National Tertiary Education Union (NTEU) and voted not to endorse the University’s latest enterprise bargaining offer.

CPSU Branch President Grant Wheeler told Honi Soit that there was a “fairly overwhelming sentiment” to not support the proposed agreement at a members’ meeting last Tuesday.

Nonetheless, the CPSU would not commit to further industrial action.

The proposed EBA includes a 14.5% pay increase over the duration of the agreement, which would expire in March 2017.

The NTEU’s canvassed 72 hour strike was called in response to what was perceived to be a below-CPI wage increase of 11.6% to the end of 2016.

Despite the NTEU’s decision to sign on to the University’s latest offer, the CPSU argues that even a 14.5% wage increase may not keep up with inflation. 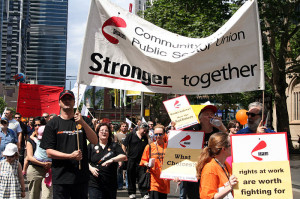 The University has extended the length of the agreement in its latest offer, and has consistently refused to backdate salary increases to compensate for the lack of a wage increase during negotiations over the new EBA. In effect, this means that staff have not received a pay increase in over a year.

“CPSU members remain disappointed by the sub-standard, sub-CPI salary increase offered by the University,” Wheeler wrote in an email to staff.

“CPSU members are particularly concerned by the extension of the length of the Agreement under this offer, locking staff into this sub-CPI rate for even longer, and the continuing lack of provision for back dating the salary increase under this proposal.”

The new EBA is likely to be six months longer in duration than the 2009-2012 Agreement, which included a pay increase of 15%.

The CPSU is understood to be aggrieved about a perceived lack of consultation over negotiations on the part of the NTEU, particularly given many of the University’s lowest paid staff are non-academic staff.

CPSU members are also said to be frustrated that a flat pay increase for staff – which would deliver a proportionally higher pay increase to lower paid staff – seemed to no longer be on the bargaining table.

When asked about the likelihood of further industrial action, Wheeler was equivocal.

“Our members understand that there is fatigue amongst staff at the University,” he told Honi.

Wheeler speculated that in initially attempting to strip back conditions like leave entitlements and workload requirements, “the University was trying to cause fatigue amongst non-unionised staff” in the lead up to the eventual pay dispute.

Given the NTEU’s decision to sign an in-principle agreement for a new EBA, the University now appears to be in a position to put the proposed Agreement to a staff ballot. A bare majority of staff would be required to vote in favour for the new EBA to be officially accepted.