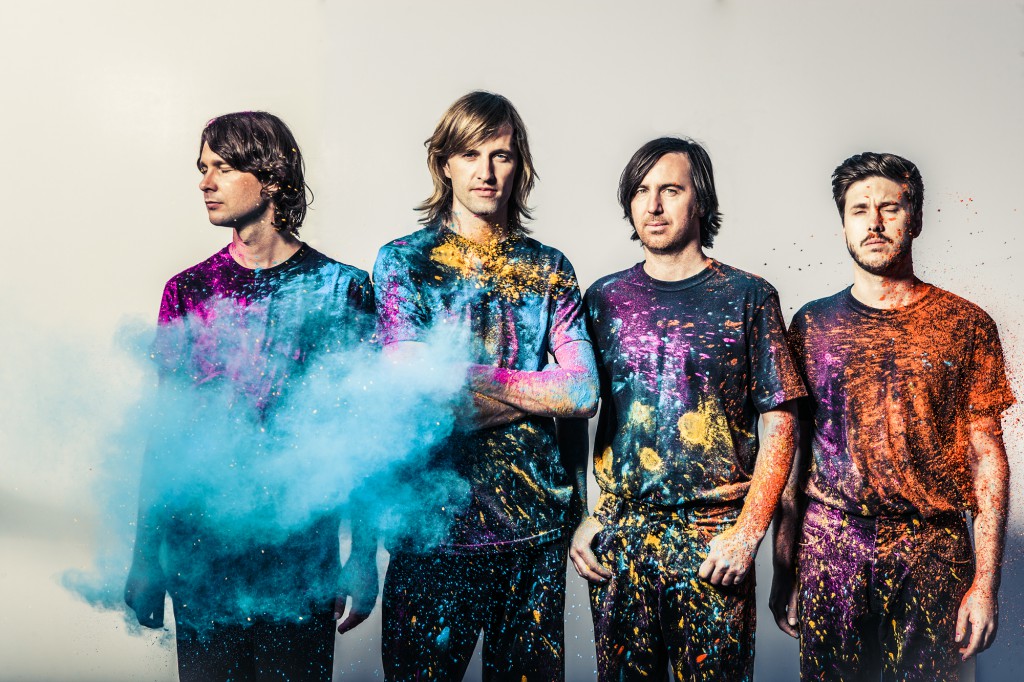 Dan Whitford of the Australian electronic dance prodigy, Cut Copy, is pretty damn excited by his band’s fifth album Free Your Mind – so excited that according to his press agent he has forfeited a lunch break in order to talk with me, and the day’s worth of journalists arriving at his office. Being quite nervous and a little star-struck, I just have to say that Whitford came off as a genuinely nice, eloquent person – almost too down-to-earth to be reasonably comprehended as the centre of CUT COPY’s explosion of explorative, hypnotic and cathartically catchy tunes, with Free Your Mind as no exception.

The new album is being rigorously promoted as an attractive mix of sounds from the two 67 and 88 Summers of Love. Although I was unaware there were two, this truthfully describes an album which deviates from CUT COPY’s synth discothèque sound to posit an exploratory wash of acid house, rave and psychedelic sampling over their characteristic, all-too-catchy dance beats. Passages of spoken word, tripped-up instrumental breaks and Whitford’s mesmerising vocals ensure the album is just as much of a journey as the title implies. The title track has already premiered at coded Billboards nestled within the world’s deserts, as well as a music video featuring Alex Skarsgard as a shirtless (and at some points trouser-less) new-age Jesus.

In the promotional lead up to CUT COPY’s album release next week, as well as their world tour, a fully-clothed Dan Whitford had a little chat to me about his influences, making history and going to the future.

So you are also a graphic designer! How would you describe Free Your Mind in visual terms?

I worked on the album artwork so I actually have already had the opportunity to conceptualise this! So yeah, I guess I see it as a wash of bright colours. But also something quite simple and strong.

It’s quite different from your other albums. Free Your Mind incorporates elements that seem at odds with that 80’s glam and synth sound like psychedelic, world and even some Gospel elements. How would you describe the transformations in Cut Copy’s sound?

It’s probably something that just evolves for each new record. We started being fairly interested in synthesiser music, not necessarily 80’s music, but pop songs and love songs and also that synthesised sound. Later on I think we’ve gradually moved on to being more curious about 90’s sounds – maybes it has just taken us a few records to fully get there. I guess for this one it has been a rediscovery of late 80’s and early 60’s rave scene and post-acid house music with bands such as Primal Scream, Happy Mondays and the KLF.

What drives you to keep transforming?

I guess with each record you always have a different set of tracks you’re listening to at home and reference points. The other thing is that along the way each of us has become a lot more competent at what we do in the band. When I listen to Bright Like Neon Love now I can kind of hear that we don’t really know what we are doing and that it was kind of the best we could have done at that point of time. And it’s cool for its naivety and imperfection. But now I feel like we have a bit more control over what we are doing and that we can push in different directions that at a point we would have never thought possible, like Gospel and things like that.

There is also quite a lot of variation on the album itself. Even ‘Free Your Mind’ and the second track, ‘We Are Explorers’, are very different. What artists or philosophies inspire a band to actively experiment across their albums and actually within them?

The idea of having all these disparate kind of fairly disparate ideas or styles on the same record, I guess reflects the fact that I’ve always had a fairly broad interest stylistically in types of music. I’d rather have the world to choose from rather than just one thing. Like saying we are a “punk band” or a “dance band.” I’ve always kind of liked listening to artists who have a pretty wide range of things going on in their music. And I guess we have grown up and are still pretty obsessed with the idea of an album that you have listen through, have the whole experience to understand it.  It’s like a challenge to the listener; are you going to come on a journey with us from this idea to this idea to this? It’s almost a dare.

I guess the biggest change I heard in this album is the introduction of psychedelic and acid elements, as well as a change in your vocal style. You also collaborated with David Friedman who has mixed strongly psychedelic albums with bands Tame Impala and MGMT. Why psychedelic? Did you feel it in your bones?

I think just gradually, making maybe the last and this record, it’s just been an approach to music I’ve found a lot more interesting. And I have started listening to a lot more psychedelic stuff, whether old or new stuff, in my own time. It has probably just krept up as being an influence without me even being conscious of it. I’ve kind of weirdly gone back to listening to a lot of Beatles records. There is a running joke within the band that I hate the Beatles. So don’t tell them but I have been listening to them stacks, as well as The Doors, Happy Mondays, The Seeds and then I guess sought of new stuff as well, like Connan Mockasin and Ariel Pink.

Just in the title of the album, as well as the cult figure played by Alex Skarsgard in the music video, and the subliminal messaging samples in the intro – there are a lot of references to pop psychology in this album. To what extent do you think pop music still fulfils a kind of saviour role, as it did in the Summers of Love?

It depends what kind of popular music you are talking about – if you are talking about the manufactured music industry, then perhaps I would feel a little like it’s not as important as it was. But I think music still has the power to create change and do interesting things. I guess that’s why I started to get interested into the Summer of Love and the rave scene, its just a point of time when youth culture and pop music transcended just being entertainment to become a unifying force for the youth to create a better life for themselves – and I guess its corny, but to also create a better world.

I don’t think art always has to do that but it’s nice to know if things get really shit there is a possibility that stuff like art and music can change things for the better.

The two periods of time you list as influences for this album – the late sixties and eighties- probably represent the music your parents listened to and the music you heard when you were a kid. How much do you think your choices of samples and sounds have to do with nostalgia?

I find personally probably quite a lot. I have a lot of nostalgia for time and periods of music I wasn’t actually part of. I tend to hear a track and think, “that’s cool”, and then read about it. I had that with previous records with disco era, early punk and early 80’s New York. It’s almost like becoming a little bit obsessed – the myth becomes greater than the reality. I think that’s the part of what’s so inspiring about music: the aura of these things just grow because so many people are influenced by it. In reality, early punk music was probably made up of like twenty people or something who were the main stayers. But they went on to influence so many people it seems impossible to imagine they were playing in a tiny club like CBGB’s, as they are massive names now. And I think the same thing goes for rave or 60’s psychedelic music. Being disconnected from it makes it that much more appealing.

If we zoomed into the future and looked back on the period of music taking place now, as well Cut Copy’s music, what do you think its “myth” would be? What would people be saying about it?

I don’t know. I think we are already lumped in with The Presets and The Midnight Juggernaughts and that whole explosion of dance music played live in Australia. But since then we have become more popular internationally, so hopefully the story isn’t written just yet.

Also I just get really excited about the scene now. When I think about when we first started, which was around ten years ago in a bedroom, really the basic beginnings for Cut Copy, we felt like there wasn’t anything vaguely like what we were doing in Australia. Now there is a whole scene around electronic music, that’s not just club music, but a really diverse range of cool underground stuff. Now in Sydney there is a whole warehouse party scene with Chicago House inspired stuff, psychedelic bands and Krautrock kind of things. It just seems a lot more diverse.

So it is a bit hard to tell what will have happened by the time we start looking back on the period now – hopefully we (Cut Copy) will be remembered in some capacity…you would hate to be the forgotten ones, wouldn’t you?

What is your favourite track?

On the record? They’re all my little babies so I don’t want to pick one out otherwise the other ones will get jealous! I will say, maybe, Let Me Show You Love.

Free Your Mind will be released on November 5th, you can stream the entirety of the album here.