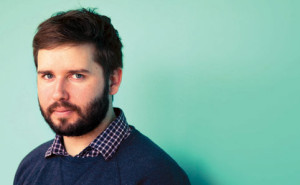 Kip Williams wrote, directed and starred in a one-man play called The Dismissal while he studied at the University of Sydney. The first act went for exactly an hour. The second ended after sixty consecutive seconds of silence from the audience. If at any point an audience member tried to leave he yelled “fuck you” at them so gutturally that finishing the show’s two-week run necessitated vocal steroids. Other members of the Sydney University Dramatic Society disliked his auteur-ship so much that his posters were vandalised.

I find it hard to imagine the 25-year-old who has just bought me a beer pissing anyone off. He is intelligent, thoughtful and polite. For a man with a resume few in the theatre industry can dream of, he is remarkably humble. He likes to direct plays in whose words he finds a musical quality. It is no surprise then, that he is drawn to opera, to Dylan Thomas, and to Shakespeare. His family is musical. Williams is the only one of his siblings who did not study at the Conservatorium. He jokes that he might have gone the same way if his voice hadn’t broken awfully at 15.

Williams’ most recent production, for the Sydney Theatre Company, is a pared back Romeo and Juliet. He adapted the work himself, reducing the cast size and subtly altering roles, in order to focus on a patriarchy that robs women of their expression and autonomy. Music and movement are our entree into his re-imagination of Verona. The young men of the play have nothing to do but drink and fuck, and amidst this, the violence which drives the tragedy seems inescapable. In his director’s note, Williams explains that he has placed more emphasis on Capulet encouraging the marriage of Paris to Juliet.

I ask him if he finds it hard, as a man, to make theatre that captures the experience of women. He describes himself as a feminist and that he thinks he has a right to comment on issues of sexism, but adds that Juliet (Eryn Jean Norvill) was an incredible collaborative resource. His imagination, to which our conversation often returns, is the only thing he lets limit his creative process. When reading Romeo and Juliet he saw “not a world split into two distinct halves, but rather a portrait of a singular universe”. Gender becomes the subject, and as Juliet delivers the play’s prologue, gun to head, his imagination is realised.

When asked what new theatre he is most excited by, Williams is enthusiastic about productions that re-imagine classic works and draw out themes of gender and class. It is there in Romeo and Juliet. One has to imagine that Macbeth, his next production, will also deliver in this regard.