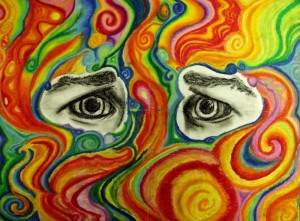 Drugs were, at a time, a part of my life. I had started smoking pot some time late in Year 10, and it was never a gateway to depravity, it was never obstacle to my dreams, it didn’t destroy my family.

Years later, I took LSD. It was incredible. Nothing could compare to the feeling of watching the sun emerge out of a rainbow while your brain was getting fried on a combination of acid and Funkadelic’s ‘Maggot Brain.’ Acid made you see things in a different way. There was no life changing moment, but it was fun: my friend started to look like a mix of Buddha and Chairman Mao, the table looked like a screensaver, and chilled grapes tasted really good.
That was the first time. The second time was different.

Eight hours on one tab – LSD was a full work day. Someone passed a bong around and I took a drag to kick it on. I was having a great time, chatting, listening to music. We were comfortable. It was a nice house.

Gradually I felt like my head was falling, and then I’d bring it back up, only for it fall again. It was happening in a loop. I didn’t know what was going on, and I kept looking to my friends to see if they were reacting. They kept looking at me suspiciously, like I knew something they didn’t. I could hear them talk about me without moving their lips. The conversation became faster, until I realised it was just one person talking about me, inside me.

I ran back to the yard, freaking out. I lay on the grass to feel grounded, a better sense of being in my body. I didn’t. I wondered if I was dead. I thought I was dead.

I tried to solve maths equations. Maths was logic, and logic was real. Made up numbers and signs started appearing in front of me, moving towards me and crashing into my skull, exploding. I started to walk around again.

I remember going into the house to collect myself. I looked at the TV, and The Simpsons was on, and Sideshow Bob was laughing maniacally.

I kept telling myself it was the drug, but this wasn’t the drug I had imagined. It was nothing like I had predicted. The scariest part was how lucid everything was. Nothing was hazy, so I remember it well. I wish I couldn’t. There were times when I felt so low in this bad trip that I felt like killing myself. I saw a knife in the kitchen, and picked it up. I heard the cars outside and felt like running into the traffic.

I put down the knife. I went to bed. I had to get used to it. I lay there, looking at the wall, at the hallucinations that danced casually in front of me. Soon, I fell asleep to the sounds of the others still tripping and having a good time.

I felt fine the day after, but melancholic. It was a disturbing experience; one I wish I never had. I had flashbacks for months after, not of any particular hallucination, but of the feeling of detachment from the world (known as “depersonalisation” or “derealisation”).

Whenever I smoked marijuana after this, paranoia and dissociation would return. I had to stop. I’m not against drug usage, but they’re made for some and not others. Drugs are no longer a part of my life.