William Bugmy is an Aboriginal man who has spent most of his life in prison. Growing up in rural NSW, he witnessed his father stab his mother fifteen times, and never learned to read or write. He has committed various offences, most recently an assault on a prison guard. A recent High Court decision found that the disadvantages of his background should be given full weight at every sentencing. A series of prison terms have only had a negative impact of Bugmy’s already difficult life.

Imprisonment is the main tool of our criminal justice system, but prisons are ineffective at reducing crime. Prisons target the poor, create re-offenders, and serve the interests of big business. Prisons should be abolished.

Prisons are meant to serve as a deterrent and are thus intentionally terrifying. Inmates live in fear of guards and other prisoners. David*, who has served sentences in NSW and ACT commented that guards turned a blind eye to prisoner violence: “There would be a lot of incidents of people banging their heads on the toiled bowl, for example, or slipping down the stairs, you know what I mean?”

Female prisoners are prone to sexual abuse, at a rate five times higher than male prisoners. Prisoners have little access to their friends, families, education or recreation. Almost half of all deaths in prison are suicides.

Despite brutal conditions, evidence shows that severity of sentences and conditions in prison have no deterrent effect. Tom Bathurst, Chief Justice of the NSW Supreme Court, says that there is no persuasive evidence that deterrence works for the majority of crimes. Bathurst claims that the idea that criminals conduct “a rational assessment of their planned illegal behaviour’’ bears ‘’little resemblance to reality’’.

Nobody commits a crime like drug dealing, theft, rape or even murder, if they think they will go to prison. Since they do not think they will be punished at all, the threat of long sentences is no deterrent.

Prisoners are isolated from the outside world, have their incomes cut off, and then are released into society again with new criminal contacts. A major problem according to David is that minor offenders are lumped in with dangerous ones. “Many people that are in prison should not be there. I was there with a lot of people who were in for drink driving and minor charges, you know? Just repeat offenders that were not all there in the head. They should have been given other alternatives, other rehabilitation possibilities. Instead they were given 12 months to think about it with a pack of animals” Prison does not teach prisoners to behave, it teaches them how to be criminals. In England, some prisons have a reoffending rate of 70%. Over half of Australian prisoners have served a previous sentence.

Almost a quarter of prisoners are of Aboriginal or Torres Strait Islander descent. An Indigenous person is 15 times more likely to go to prison than a non-Indigenous person. They are especially prone to abuse or neglect by guards and police causing deaths in custody. Most prisoners come from similar backgrounds: low socioeconomic status and poor education.

When poor families have their breadwinners taken away, they are plunged further into poverty. Upon release, a criminal is barred from many professions and will be generally discriminated against. With few job prospects and new criminal contacts gained in prison, it is inevitable that many former inmates turn to crime and thus a permanent criminal underclass is created by the prison system.

Australia is increasingly following the American trend of privatising prisons. Many facilities in Australia are run by corporations like Serco, G4S, and GEO Group.

Higher prison counts and tougher sentences do not provide a deterrent effect to crime, as statistics attest. The prison lobby is aware of this, but their ultimate goal is profit, not the public good. High inmate counts are good business for private security companies, and there is an incentive for those companies to lobby and influence government policy.

This influence of private security companies on public policy is often called the prison-industrial complex. Lobbying in the US is far more brazen than in Australia, but the pattern is the same. In the US, lobby groups funded by security corporations make private donations to key figures from both the Democrat and Republican parties. Senators and congress-people who sit on committees related to immigration and law enforcement are specifically targeted. For example, New York Democrat Chuck Schumer received at least $100 000 from the prison lobby in 2012. He is chair of the Rules Committee, chair of the Subcommittee on Immigration and Border Enforcement, member of the Subcommittee on Crime and Drugs, and Subcommittee on Administrative Oversight and the Courts. 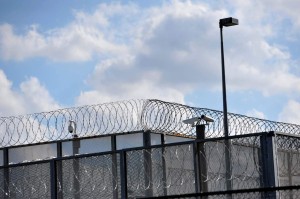 In Australia, Serco for example employs a team of paid lobbyists and donates money to both the Liberals and Labor. Serco runs three regular prisons and nine detention centres including Christmas Island.

These donations encourage policy makers to introduce mandatory detention for asylum seekers and to enforce drug prohibition. It encourages government spokespeople to foster a false public belief that prisons are a solution to the problems of crime. In reality, the prison-industrial complex works precisely because it doesn’t provide a solution – profit is made by increasing crime and incarceration. Unfortunately, lobbying works – the US now imprisons a higher proportion of its own citizens than any other country.

Reforms can be made like ending privatisation and focusing on rehabilitation instead of retribution. Rather than being an instrument for revenge, prisons would be better off focusing on reforming inmates. Trade apprenticeships, counseling, and drug rehabilitation programs go some way towards reducing the rate of reoffending, turning otherwise hopeless people into productive members of society. A good example of this new style of prison is Bastoy Island in Norway, where even murderers live with minimum security, learn trades and have ample leisure time. The rate of recidivism is only 30%, compared to 43.7% in Australia. The prison reform movement has done good work in shifting the focus of prisons away from simple punishment.

I spoke to Brett Collins, coordinator of Justice Action, an Australian prisoner advocacy group. Collins was previously an inmate himself, having first gone to prison at age seventeen, and later serving ten years out of a seventeen year sentence. He then gained an Arts degree in Law and Economics from the University of Queensland and a postgraduate diploma in Criminology at USYD. He describes the prison system as “unfair, unreasonable and counterproductive”. His organisation seeks to improve the lives of prisoners through relentless lobbying. Despite the short term victories that Justice Action has won, the ultimate goal is not simple reform but the abolition of the penal system as we know it.

Almost a quarter of prisoners are of Aboriginal or Torres Strait Islander descent. An Indigenous person is 15 times more likely to go to prison than a non-Indigenous person.

Rehabilitating criminals is difficult in a prison environment. The power imbalance between guards and inmates lends itself to abuse. The isolation from society and concentration of criminals together provide an unsafe environment for prisoners to learn.

Reform measures are worth taking, but will not fix the fundamental problem that our criminal justice system is backwards. Instead of locking people up once they have done something, we should focus money and attention on fixing the root causes of crime. It costs an average of $75 000 a year to keep somebody in prison. If that money were spent on schools, welfare, and providing jobs then the conditions which create crime would be minimized and we would have no need for prisons. Simply legalizing and regulating currently illicit drugs would take thousands of people out of the criminal justice system so that we could instead provide treatment and rehabilitation.

A focus on social programs and wealth redistribution would prevent many crimes, and a system focused on rehabilitation rather than punishment would prevent minor criminals becoming serious ones. However, when it comes to very serious crimes, it is hard to see alternatives to a prison system.

Educating people about respect and consent is a better approach to rape prevention than punishment after the fact, but some people will never get the message. Most murderers can be rehabilitated, but there are rare serial killers who will always commit violence if they are left to their own devices. David stresses that prisons do more harm than good for most prisoners, but that there are some “career criminals” who are “unimaginable in society”.

Unfortunately some form of detention will always be necessary for the extremely dangerous, but it should be a last resort, and it does not need to be cruel.

For the overwhelming majority of crimes, prison is a waste of money. Even a reform-focused prison is destructive, breaking up families and communities and creating criminal networks on the inside. Tough prison sentences are ineffective at reducing crime, but the prison-industrial complex is geared towards failed policy. We should spend less on policing, trialing, stigmatising and imprisoning poor people. We should redirect our resources into directly preventing poverty, giving opportunities for criminals to reform, and educating people about sexism, homophobia and racism. With the prison population increasing by 4% a year, we are running out of time.

* Names have been changed to preserve anonymity