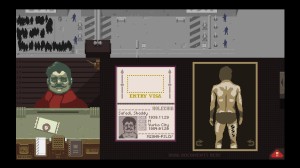 On its surface Papers, Please appears to be a creative variation on the traditional puzzle game. Its interface is familiarly low-tech and its premise seems utterly banal, but lurking beneath the surface is a truly unique game with literary potency.

The game centres on the day-to-day work of an immigration official in the fictitious Soviet nation of Arstotzka. The idea is simple enough: the player must examine the paperwork of migrant hopefuls and determine if they are eligible to enter the country. Basic game play revolves around catching bureaucratic anomalies and dismissing individuals with invalid paper work.

At the end of each day, the player is awarded a commission for each migrant processed (you are penalised for making mistakes). You must pay for rent, heating, food and eventually medicine for the extended family, all of which is almost impossible to cover at once.

As relations between fellow nations in the surrounding eastern bloc deteriorate, you are expected to look at more and more detailed pieces of paperwork and to go through increasing levels of inspection, all the while trying to process enough migrants to feed, heat, house and medicate your loved ones.

While video games have started moving more and more towards articulating moral significance (I’m looking at you Bioshock I and Fallout), Papers, Please really is a step forward. While both of those games feature and reward moral behavior, Papers, Please is concerned with exploring the tension between pragmatism and ideals. While other games have begun leaning towards a didactic story to complement and enhance the game’s story, Papers, Please uses the game to complement its moral quandries.

The player sits on the precipice between ‘The Man’ and ‘The People’ and in many ways is encouraged to remain loyal to both entities. But in Soviet era Arstotzka, that is not possible. The game is heart-wrenching and takes an emotional toll, something that isn’t spoiled by its early NES style graphics. Denying person after person entry, especially after they beg, is difficult. It quickly becomes apparent that the only people you can break the rules for are those that can afford to bribe you.

Designed by an American game designer, it is hard to imagine this game outside the context of modern American immigration rhetoric, or outside of current asylum seeker discourse in Australia. By placing the player in the shoes of the enforcer and not the victim nor the policy makers, it humanises the entire narrative of immigration.

The game forces you to feel true compassion and responsibility for the failed migrants that you must turn away; they are not ‘queue jumpers’, ‘boat people’ or generic foreigners. They each present their own stories; each pixelated bundle of documents represents a human being that you are inclined to help but pressed to turn away. It injects humanity and subjectivity into an issue in sore need of both.