You might have noticed some stickers in bathrooms around the university that say “we all need to pee”. These stickers were an initiative of the National Union of Students (NUS) queer officers, in an aim to reduce gender discrimination for trans* people in bathrooms, and to ask people to stop and think before they question someone’s right to be in a gendered bathroom. Bathrooms can be a particularly hostile environment for trans* people who may not fit neatly into a gender binary, or may not appear like the gender they are. The Women’s Collective and Queer Action Collective have been putting these stickers in bathrooms around campus to raise awareness around gender discrimination.

After seeing all the attempts to rip down the NUS stickers in various bathrooms around campus, a few of us decided to take action and put up additional stickers in a more permanent way. We spent two hours putting up new stickers in men and women’s bathrooms which were reinforced with PVA glue. We went to check out our work around the Wentworth bathrooms and found all of them gone. Dishearteningly, people had gone to extraordinary efforts to remove the stickers, just hours after we had put them up. They were scratched off, drawn on, and in one case, covered in toilet paper. It only got worse when we went into the men’s bathrooms to see them all intact and perfectly dry. Unexpectedly, the perpetrators in this case was rather not male oppressors but female aggressors, biological females obstructing trans-wom*n from entering female-autonomous spaces.

We felt a surge of shame towards those who could only be our ‘fellow women’ for trying to destroy attempts at making the university a better and safer place for all students. Instead of viewing equal access to the basic need of bathroom facilities for transwomen as positive, rather, the mere presence of the posters caused strong, negative reactions from unknown female visitors to the cubicles with toilet paper maliciously stuck to the stickers and evidence of other futile attempts clawed into the pockmarked white edges of dried stickers. Now the vandalised stickers send an explicitly queerphobic message, potentially causing gender-diverse people to feel less safe in bathrooms, specifically female ones.

Female policing of gender identity and expression in gendered spaces is so insidious and pervasive because we have literally been conditioned to do it from early childhood. We are taught to reject women who express themselves in a “masculine” manner or any kind of gender ‘intruder’ attempting to enter a space where the door shows a stick figure with a dress.  The level of misogyny experienced by biologically born females replicates and reverberates in transmisogyny, the hatred and prejudice against transsexual women. In the mainstream hegemony of heterosexual, nuclear family ideals, women are viewed as mere conduits to the man for the purposes of fertility, domesticity and sitting pretty while being valued and measured for beauty like a prized farm animal. To cisgender women aiming to fulfil these normative expressions and presentations of feminity, trans-wom*n merely translates to further competition. The ‘threat’ that transgender women can pose to cisgender women is manifested in the tasteless, senseless slurs of ‘chicks with dicks’. The hatred of trans-wom*n stems from the fear of the ‘fake’ woman, the pretender amidst the ‘real’ women who can bleed and birth as God intended. 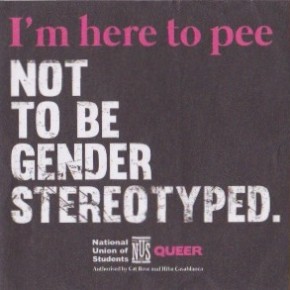 Cat Rose and Hiba Casablanca, the NUS Queer Officers, were instrumental in the initial campaign. Rose felt that the right to use the bathroom of your gender, or the closest toilet around if you are gender-neutral, without questioning and harassment had not been effectively addressed on campuses and other public spaces. The posters were intended to advocate for respectful behaviour in bathrooms, and send a clear message that any harassment based on gender presentation is unacceptable and must be reported. Rose was very disappointed about the incident, however, she and members of the queer community expected the stickers to cause some controversy. Bathrooms breed a culture of ostracism for anyone who doesn’t conform to the gender binary, which is clearly defined by the normative symbols on men’s and women’s bathroom doors. There have been other incidents where the stickers’ ‘subversive’ message “I’m here to pee, not to be gender stereotyped” elicited negative reactions in public bathrooms, in an appalling reflection of the trans*phobia in our society.

But the vandalism actually shows that this campaign is working, and that the stickers challenge people to question their assumptions and prejudices about gender stereotypes. It also testifies the reality of these prejudices, sparking anger among allies. People who want to express their support have approached us on numerous occasions, and members of the Women’s and Queer Collectives have been very enthusiastically helping us replace all of the damaged stickers. While this campaign alone cannot change our culture, hopefully it will continue to challenge cis-normativity in our society.