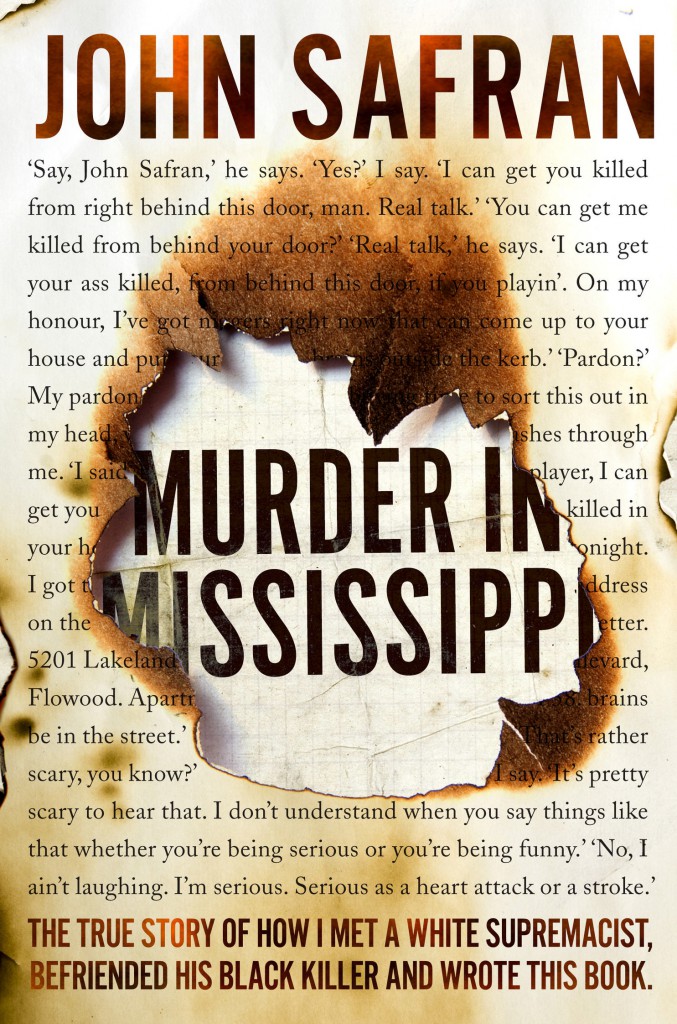 The newest addition to the list of classic true crime writers could well be Australia’s enfant terrible of the screen, John Safran. Six months of research and inquiry in Mississippi has given us his first foray into the world of literature. Murder in Mississippi takes cues from jewels in the true crime crown such as Midnight in the Garden of Good and Evil and In Cold Blood, leading us into the Deep South and scratching the surface of its all-pervading secrecy.

The book unpacks a bizarre murder in which a well-known yet mysterious white supremacist, Richard Barrett, has been killed by a young black man, Vincent McGee, in his home. Already this is not your average story of the meaning of race in the South – no mockingbirds are to be found here. Indeed, Safran himself told me, “Ideally I would have liked more of a clear cut race story and I was really agitated that things weren’t … This would be so much clearer if Richard had killed Vincent. I was so exhausted and irritated that I couldn’t get one clear cut story of Richard’s life or what happened between him and Vincent. By the end of it though, I thought, this what makes it interesting”.

What really happened between Richard and Vincent remains a mystery, though in talking to a range of oddball and curious Mississippians, Safran sheds light on new possibilities – including a suspected sexual relationship between the two men – further blurring the lines in what he calls his “Truman Capote moment”. Throughout the book these characters leave readers to be consumed by the mystery of the Deep South and get an idea of its distinct twang. Safran describes this quality further: “There were a lot of secrets. There were no fences and to get to the houses you have to really walk down deep into the property. I guess it’s a way of reconciling Southern hospitality with ‘fuck off’ … Things go on in people’s houses where you’re never going to see them. Here, lots of things are going on in more public places – you can start finding out about Melbourne and the people or whoever by pubs and things like that. I found it difficult that there doesn’t seem to be an equivalent there. The streets are very quiet. I was there for a while and though a lot of things just aren’t played out in public spaces.”

Nowhere is this better exemplified than in the sleazy rat of a character of Richard Barrett, who despite being dead, manages to be the indisputable star of the story. Safran and readers alike are perplexed by how many faces he seemed to have had in his lifetime – each person John speaks to appears to have met a different Richard Barrett. Sometimes we hear mismatched accounts and tidbits of his life (including fascinating FBI files); other times his name alone evokes extreme fear or gushing.

Vincent McGee, another complexity, speaks to us for the majority of the book from jail. A cocky, troubled and violent youth, Safran struggles to capture basic information from McGee during their many phone calls. He filled me in on a trade secret in combatting this: “With Vincent, there were a lot of conversations at the start where I was like, ‘What were you like when you were young?’ or ‘When you were young, did you get in trouble at school?’ and nothing would come of that. But then I realised the trick was, I went to him and I said, ‘Michael Dent [a friend of McGee] said this, and he’d be like, ‘Bullshit! Michael Dent’s full of it, that little faggot, blah blah blah’. So I cracked that riddle – you come to people with what someone has said, preferably about them, and then they talk. And then through that, all the themes you want to deal with become apparent.”

Having already been crucified (literally), attempted to join the Ku Klux Klan, and had a fatwa placed on Rove McManus, surely John Safran was undeterred in Mississippi, asking questions of strange people and being immersed in a hyper-parochial environment. When asked how his first book fit into his career and existing oeuvre, he said: “I guess on a practical level so much of what I do is me pushing and creating my own work. I thought, why don’t I try something else out? It’s me trying to explore other things. For TV I’ll write a piece and we know how it’s going to work. We’ll have a whole story arc that we’ve prewritten – it’s pretty contained, whereas the book just goes everywhere … The easiest way to write a book is to just write what happens. I don’t have the skillset yet to fudge a book. The more truthful I was the more I stopped tying myself in knots to explain every little thing which felt unnatural anyway – that’s just not what life is like.”

Murder in Mississippi is out now.