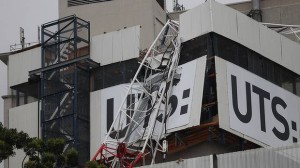 The NTEU claims that the suspension is politically motivated, and that Wade has been consistently “targeted” in the workplace throughout negotiations over a new enterprise bargaining agreement (EBA), which governs the pay and working conditions of staff.

UTS management issued a statement confirming it had suspended Mr Wade, but refused to comment on the internal investigation or legal proceedings. Around 100 people gathered outside the UTS tower on Monday morning to protest the suspension.

In September, a Fair Work Australia hearing compelled UTS management to withdraw allegations of unsatisfactory performance on the part of Wade. FWA ordered that protocols be established to facilitate Wade’s engagement in the enterprise bargaining negotiations in a way that would not compromise his duties as a staff member.

“Mr. Wade has been targeted because he an active unionist and highly effective in defending staff conditions against management’s attempts to avoid the fair processes and procedures in the enterprise agreements,” NSW branch Secretary Genevieve Kelly contended to Honi Soit.

NTEU representatives met with University management last Friday to challenge the suspension, and Honi understands that the matter has now been appealed to Fair Work Australia.

The UTS Student’s Association and the secretary of Unions NSW both criticised the move to suspend Wade.

NTEU members at the University of Sydney said they were not aware of any instances in which individual members had been targeted throughout the enterprise bargaining process and industrial action this year. Branch Vice President Damien Cahill noted that the University had instead attempted to sideline the Union in its bargaining claims – such as in attempts to exclude the Union as party to the enterprise agreement.

With regards to the UTS bargaining process, the NTEU argues that UTS management has been intransigent in its negotiations over the new EBA. Mr Wade himself told Honi Soit several weeks ago that management “insisted on meeting only once a month” and “will not reveal their intended claims and are stalling over committing to any significant or meaningful decisions”.

He stated that the Union’s key claims relate to career development and academic workloads.

However, Honi understands that the UTS Branch has not at this stage applied to Fair Work Australia for a Protected Action Ballot, which is necessary in order for staff to take protected industrial action.

Mr Cahill asserted that nationally, universities had been “much more coordinated” in their bargaining claims than in previous years, particularly around pay and “managerial prerogatives” such as casualisation and staff consultation in change management, which were a key points of contention in the University of  Sydney dispute.