During the 1970s, a new politics of identity emerged that worked to overturn the narrowly conceived formalism dominating art criticism of the 1960s. While this was informed by an ethics of collectivity and gave marginalised groups the opportunity to express their personal narratives, eventually identity politics became less effective as a form of self-representation and more useful as a ‘politically correct’ aesthetic orthodoxy adopted by the dominant cultural group to place the work of culturally diverse artists into easily definable categories. In the Australian context, essentialist modes of classification separated Indigenous art from contemporary art, particularly the work of urban-based artists.

Australian curators, critics and audiences were not prepared for an emerging Indigenous artistic practice that challenged their narrowly defined conventions of authenticity. The work of urban-based Indigenous artists triggered reactionary disapproval; one common and simplistic remark of the 1980s was that it resembled “second-rate white art”. There was a rigid dichotomy between artists from ‘remote’ Indigenous communities and their urban counterparts. If the subject matter of urban Indigenous art diverted from that of ‘traditional’ bark painting, where were the familiar visual markers of ‘culture’? As Glenn Iseger-Pilkington observes, artists “working in photomedia, video, and performance cannot escape the romantic notions of traditional custodial practice”. The conflation of an “Indigenous brand” with an “accepted aesthetic”, such as Central Desert dot painting, reinforces the stereotype of urban-based work as ‘inauthentic’. It seems that urban Indigenous art has occupied an indefinable grey area.

Urban Indigenous artists found themselves in a double bind when it came to the content of their work. At the same time as it failed to mimic the accepted aesthetic of dot painting, it was deemed too political, or read exclusively as being about ‘difficult’ issues. According to Brenda L. Croft, it “generated the fiercest reaction from the predominantly Anglo-Celtic Australian male art ‘Mafia’”. Urban-based artists were determined to break down the rigid categorisation that forced their work out of contemporary exhibitions. Indeed, their exclusion from the mainstream “smacked of paternalism and tokenism”. Artists working in ‘remote’ contexts were not free from these supercilious attitudes either – their work was misinterpreted as politically neutral, even though painting their traditional lands was an empowering act in itself. Indigenous artists across all geographic locations battled against “the ever-strengthening grip of ethnographic prescription”, but urban-based artists were intentionally pushed to the outer edges of the inner art circle.

If the fine art world declined to meet urban Indigenous artists on their terms, they found ways to articulate their vibrant creative expression regardless. Christian Thompson, an internationally based Bidjara artist, conveys “a lived rather than assigned identity” in his Lost Together (2009) series. Humpy Away From Home (2009) (Figure 1) is a photographic image from Lost Together, and it immediately evokes a hybrid sense of self. Thompson pays homage to his non-Indigenous great- grandfather Isaac by donning a thick blonde beard,which covers his face from the nose down. A bright red humpy partially obstructs our view of Thompson as he rests on a tartan blanket dressed in tartan garb. Though artists such as Thompson have been “[m]ired in the muddy waters of Aboriginal identity politics, the colonial discourse of Australia and the burden of creating racially explicit work”, Humpy Away From Home deliberately confounds cultural stereotypes.

While artists such as Thompson embrace their Indigenous and non-Indigenous heritage, other contemporary artists have abandoned the category of “Indigenous” entirely. Tracey Moffatt is a prominent figure in the art world, well known for her refusal “to be locked into essentialist or fixed identity positions”. While Moffatt deals implicitly with Aboriginal issues, she also questions “the very notion of Aboriginality” as white critics and curators perceive it. Global perspectives of contemporary art, such as postmodernism, shape Moffatt’s approach. She has stated: “’[t]he reason why I have been successful is that I have avoided allowing myself to be ghettoised as a BLACK ARTIST’”. Moffatt is acutely aware of how constricting the Aboriginal ‘label’ can become, especially after one establishes herself as an Aboriginal artist. In addition, Indigenous contemporary art is burdened by “the compulsion to protest (declare) its Indigeneity”. Keen to get to the heart of this issue, Iseger-Pilkington asks, “How do we re-brand ourselves in a world where our Indigenous brand has become so synonymous with the context and content of our work?”

Enter Brook Andrew, an urban-based artist who complicates the link between Aboriginality and the politics of representation. Andrew creates layered works that not only reflect his “Wiradjuri and Scottish identities”, but also his queer sexuality. The artist frames queerness “in a deliberately celebratory (and as a result, to some, confrontational) manner”. One of Andrew’s most iconic works is Sexy and Dangerous (1996) (Figure 2), a digitally manipulated image combining an ethnographic archival photograph of a young man of colour with Chinese characters and the words “SEXY AND DANGEROUS” inscribed across his chest in English. At first, the viewer might surmise that this phrase is a direct translation; however, Andrew plays with predetermined notions of language and culture by revealing that he simply appropriated the Chinese characters from a street poster. Sexy and Dangerous alludes to “the world of an exotic, unspecified ‘other’”: a colonial fear of the unknown and fetishisation of the colonised body. Nothing is to be taken at face value; even the subject’s white body paint, emulating “the ritual application of white ochre”, has been digitally airbrushed.

Ethnic categorisation of Indigenous contemporary art continues to pose an obstacle to urban-based artists, despite their multidimensional explorations of identity. Looking back the to 1980s, there was no space for nuanced consideration of urban Indigenous art in the mainstream – the predominantly white, male art clique made sure of that. This meant that the politically charged content and stylistic innovations of urban-based Indigenous artists, particularly those experimenting with technologies, was deemed ‘inauthentic’. Despite these limitations, urban-based artists gained strength in numbers, defying the essentialist classification of their work and the quasi- assimilationist systems working against their success. 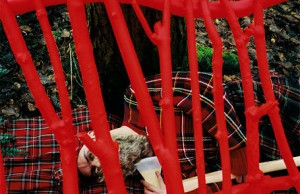