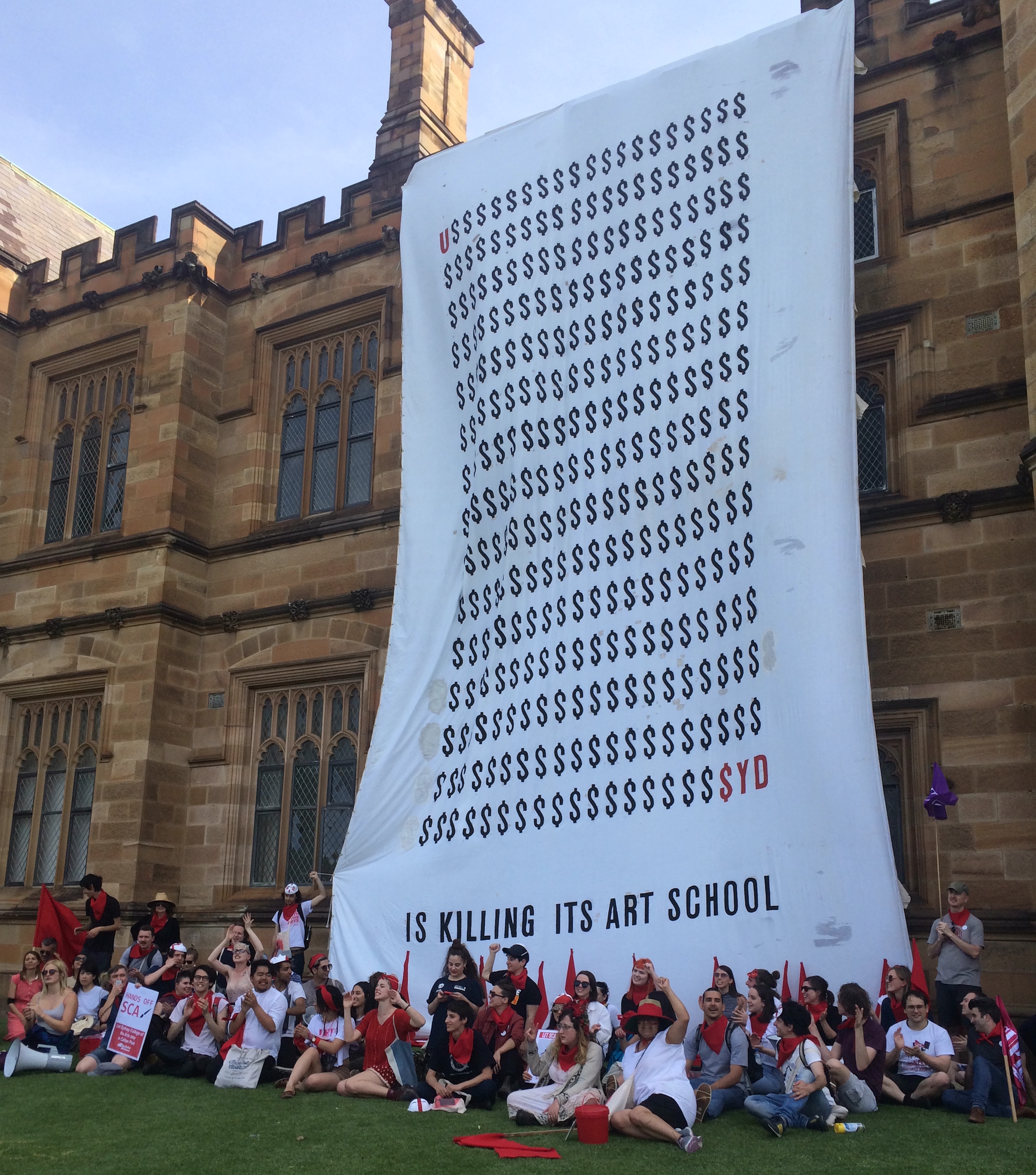 A tent city constructed by Let SCA Stay activists was removed from campus this morning at 6.30am by campus security and police officers. Approximately 20 people were removed from the site, at least two of whom were physically escorted from campus.

The tents were erected at the base of the quad yesterday afternoon, following a rally on campus which culminated in a 14 by 7 metre banner being unfurled from the battlements of the quad.

Honi understands that the protesters accessed the roof via an unlocked hatch in the clock tower.

The banner read “U$YD IS KILLING ITS ART SCHOOL”, with a large number of dollar signs, and was displayed on the quad for approximately 12 minutes before campus security cut it down.

Yesterday’s protest, attended by around a hundred staff and students, was in support of a two-day students’ strike at SCA which began yesterday.

A University of Sydney spokesperson told Honi, “The University of Sydney has repeatedly affirmed the right of students to protest about proposed changes to the Sydney College of the Arts. However, we cannot continue to support that right if it extends to damaging property, or threatening or physically interfering with the rights of other members of the University community.”

“Unfortunately, yesterday some protesters defaced the University’s Quadrangle, and even more distressingly, there are reports that physical force was used against a student who objected to the demonstration. As a result, and with the deepest regret, we have been forced to take action to remove the protestors from the University’s front lawn.”

The protest was organised collectively by individuals from the Let SCA Stay movement.

Thandi Bethune, who chaired the protest, told Honi, “I think the protest was very successful. We had some amazing speakers at our rally shedding new light on the way the uni is treating a whole range of faculties and their opinions on saving SCA.Our camp out yesterday afternoon/last night drew huge amounts of people in and gained us a lot of new supporters.”

“It also forced the university to recognise the protesters and show their true colours by forcing us off campus this morning by a disproportionate amount of security and police. They showed us and everyone else that they care more about maintaining their image than the wellbeing of their students and our concerns.”

The protesters’ demands, as detailed in a Let SCA Stay press release, include that the SCA remain at Callan Park with all jobs and courses intact, and that the Dean’s position be elected. They also argue that the University should commission an independent audit of the SCA’s finances.