The uncensored version of the front cover can be found at the bottom of the article.

A front cover of Honi Soit that was banned from stands for indecency is now being used to raise awareness amongst Kenyan women whose communities practice female genital mutilation (FGM).

In August 2013, the cover featuring the vulvas of 18 Sydney University students caused widespread controversy. The editors had sought to publish uncensored images, but were instructed by Student Representative Council lawyers to cover the labia and clitoris with black bars. When the cover went to print, the bars were deemed not opaque and so 4,000 copies of Honi were recalled.

“We are tired of society giving us a myriad of things to feel about our own bodies. We are tired of having to attach anxiety to our vaginas,” the 2013 editors said. “This cover is intended to reassure other women. Take comfort from the fact that everyone’s vagina is different, and that everyone’s is normal.”

Vice Chancellor Michael Spence said at the time that, “personally my view is the cover is demeaning to women”.

On the contrary, the uncensored cover has recently been used in Kenya to show women whose communities practice FGM what uncut vulvas look like for the first time, and has had an empowering effect.

Alison Shepherd-Smith, who works in Kenya as a gender equality and gender-based violence advisor, drew on the uncensored cover when working with a class of women from rural communities.

“I was teaching a room of women whose communities practice female genital cutting,” she said. “Out of ten women, nine had never seen a normal vulva. This is because women do not undress in front of each other, and there are no photos of normal vulvas anywhere.

“On the Internet you only find sexualised images used in pornography, where women invariably have small vaginas because they haven’t had children, or their genitals have been photoshopped to make them look ‘perfect’.

“But [in Kenya], many of these women I work with don’t have Internet access, so they don’t even see these kinds of sexualised images.

“I needed a collection of normal, naked women who looked like the range of women in the class look naked — with different weights, and not Barbie dolls. Only then could I explain why the labia and clitoris must not be cut off, and that all shapes were normal.”

At the time of publication, then-Honi editor Hannah Ryan said, “The motivation behind this cover was to say to women that their vaginas were just body parts like any other. [The outrage] is the perfect example; women have to be ashamed by our bodies and they have to hide.”

Shepherd-Smith says she remembered the controversy over the front cover, and thought it would be a good way to start a conversation about women’s bodies, as well as provide an example of natural vaginas.

“I found one of the [the Honi] covers and printed it to hold up in class — just a colour photocopy,” she said. “I told them about how the cover got pulled, and how afraid society is of celebrating a healthy woman’s body in a non-sexual way.

“The women actually said, ‘do we look like this too?’ and I said ‘absolutely’. It’s sad that they haven’t had access to this information before today, because they deserve it and their communities deserve it.”

Female genital mutilation refers to procedures that cause injury to the female genital organs for non-medical reasons, and often involves partially or totally removing external female genitalia like the clitoris and labia. It is mostly carried out on girls up to the age of 15.

The health consequences of FGM are stark: a World Health Organisation study of 28,000 women in six African nations found that women who had been subjected to FGM experienced significantly greater difficulties during childbirth and had a much higher risk of infant mortality.

In Kenya, a conservative estimate is that 27 per cent of women have been subjected to the procedure, however its prevalence varies between communities and ethnic groups. At its highest rate, FGM has 97.5 per cent prevalence in Kenya’s North Eastern provinces, although the practice was made illegal nationwide in 2011.

“Unfortunately it may be too late for [these women], because they are from rural villages where the practice of FGM is still active,” said Shepherd-Smith. “But they will have daughters perhaps, and now they can stop FGM happening to their own daughters, or their neighbours’ daughters.

“It’s very sad, but the Honi cover shot was so important. These women will now work as community activists because they know what is normal and why women must embrace their bodies.” 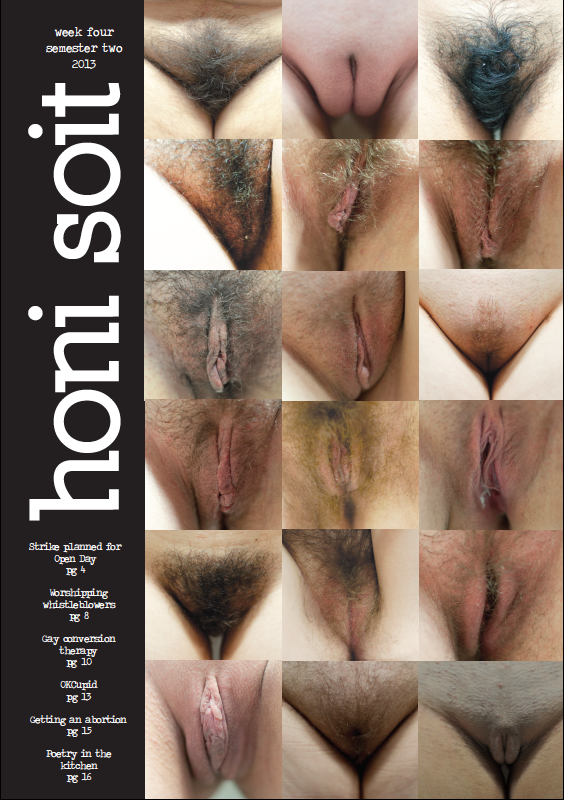