Early Wednesday morning, Macquarie Street was filled with pro-choice protesters pushing for the decriminalisation of abortion in NSW.  The rallyists clamored to support the Reproductive Health Reform Bill 2019.

The new Bill is set to be introduced this week by independent Minister of Parliament Alex Greenwich, and is co-sponsored by 13 other ministers from multiple parties including  the Nationals, The Greens, and Labor.] Liberal Health MP, Mr. Brad Hazzard is notably in support of the Bill.

“The idea that we hadn’t seen a debate [on abortion] since before women could vote…demonstrates that this should be put on the agenda”, said MP Jenny Leong.

“We’ve seen to safe access zones to provide protection for women accessing healthcare and reproductive services,” said Ms. Leong referring to the changes prior to the new Bill. “But we now know it’s time to decriminalise abortion so that we don’t see anymore barriers.” 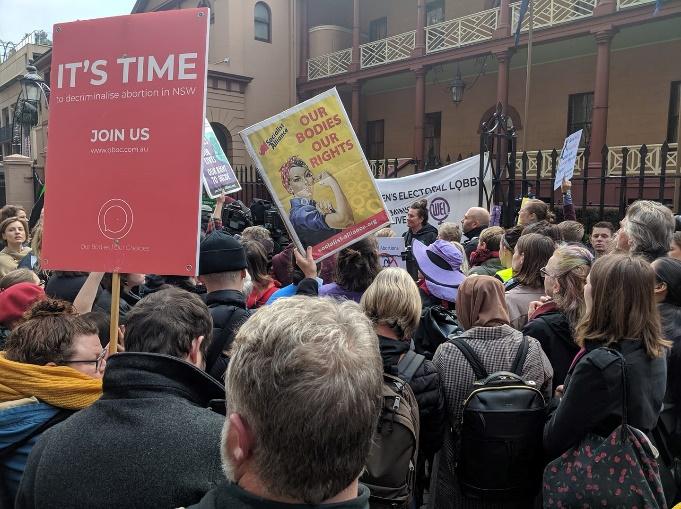 On July 1st 2018, a Bill imposing ‘safe access zones’ of 150 metres around hospitals and clinics that perform termination of pregnancy services was passed.

According to the Australian Medical Association (AMA), New South Wales is the second last state in Australia to decriminalise its abortion laws under the Crimes Act, with South Australia still keeping abortion within  its Crimes Act.

The newly proposed Bill explicitly outlines that women are allowed to request abortion by a licensed doctor for up to 22 weeks gestation, and emergency procedures without another doctor’s approval. After this time, service of termination may be approved by two doctors with a criterion based on the long term physical, social and mental factors.

“[It’s] got two elements. [One] what we are dealing with today which is legalising it, and the other which is still a fight, is making it bloody free!” said 65 year-old protester, Diane Fieldes. “There is so little availability and it’s such a working class issue because if you haven’t got the money… then your rights are actually curtailed.”

Fervent chants were heard following speeches:  “Our bodies! Our Lives! Our right to decide!” urged protestors from various activist groups, including the University of Sydney Women’s Collective.

The pro-abortion snap rally was hosted by Women’s March Sydney, and eight other co hosts including Sydney Socialist Alliance, The Greens NSW, and the NSW Pro-Choice Alliance.

Womens March Sydney has announced that another rally will take place before debates commence next Tuesday, again outside Parliament House. Supporters of the Bill anticipate a big show, in hopes of decriminalising abortion once and for all.