Disclaimer: Editors Pranay Jha and Liam Thorne are not involved in the 2019 coverage of the Honi Soit, NUS and SRC elections.

Honi asked voters for their first preferences in the presidential and Honi races, surveying 317 of the total 1168 votes cast today.

The results of the exit polls are in. The numbers point to a simpler conclusion than last year which comes as no surprise given the absence of a four-horse presidential race and preference deal dramas.

If today was the only day of polling, Josie Jakovac would likely have secured the presidency, and Fit, the editorship of this rag. But with two polling days left, the numbers are still close enough for a real contest on both fronts.

In the presidential race, Jakovac (Moderate Liberal/Boost) is currently sitting on 56% of the vote. Her rival, Liam Donohoe (Grassroots) has come up short with 44%.

Jakovac has snagged a higher pre-poll vote than recent presidential frontrunners, including Jacky He (Panda) who scored 50.9% after day one last year.

However, pre-polling numbers are no perfect predictor of this election’s outcome. The physical proximity of JFR to the International Student Lounge (ISL) advantages international student campaigns, Panda and Pro-Team.

Whilst other campaigns were visible on campus last week, Panda’s campaigners were first seen today, coming out with substantial numbers, organisation and promises of “free food every fortnight” and “shared scooters on campus,” according to how-to-votes handed to voters.

More than ten Panda tickets are in this year’s race, double last year’s, in a move which suggests Panda is looking for an outright council majority and key office-bearer roles come RepsElect in November.

As booths at Fisher, Manning, PNR and the satellite campuses open tomorrow, the outcome of the presidential race will gradually become clearer.

In the Honi race, Fit is ahead with 56% and Cream has 44%. After a slow start, Fit gained most of its voters in the afternoon. By close of polling, more than seven Fit shirts outnumbered Cream’s three.

The results are unsurprising. Yesterday, Cream for Honi member John-Paul (JP) Baladi stepped down from the ticket after showing support for Cardinal Pell and pledging to censor Honi if elected. This morning, Pulp reporters Austen Hunt and Emma Goldrick also quit, taking with them the bulk of the ticket’s writing experience.

Cream member, Anthony Segaert, told Honi that the remaining 7 members of the ticket would not be disbanding the ticket.

“We’re out here at JFR and are so excited to share our vision for a diverse and engaging Honi with our campus,” he said enthusiastically.

Honi was not alone in exit polling voters today. Sociology researchers were out to survey voters’ perceptions of Chinese people and Chinese international student faction, Panda.

It’s been cross-campaigning galore over the last few days. Several complaints have been raised with the EO over Facebook comments made by Boost figures on Cream campaign material and vice versa. The EO subsequently made a ruling requiring the deletion of Facebook comments on separate election campaigns. Both Honi tickets and presidential campaigns have been affected. Liberal Club executive, Alex Baird (Privatise the SRC), also allegedly told students to vote for Cream in the afternoon.

At midday, the EO banned Panda from campaigning for an hour after Panda was heard repeatedly campaigning to students in Mandarin Chinese. In one heated exchange between Lu and SRC President Jacky He, He said, “It is more comfortable for students to be spoken to in their mother language.”

Within the Panda camp, there are rumblings of internal divisions over its support of Liberal candidate Josie Jakovac after a recent spat between former SUPRA President, Weihong Liang, and SRC President Jacky He. Honi understands Liang wanted Panda to be independent from local political parties and He opposed this.

One Panda Law campaigner told Honi that it was okay if a voter did not wish to vote for Jakovac as long as they cast a ballot for Panda. Several voters also told Honi that they had not filled out the presidential ballot at all.

Flyers strewn across Redfern this morning also escalated into a war of words between Decheng (Clement) Sun and Jacky He with He claiming on WeChat that Sun had spread false and defamatory news about Panda. Sun denies any involvement in the flyers.

The flyers depicted a panda crowning a person with the Liberal Party logo, alongside shattered Opal cards.

“Selling international student interests,” the flyers, which were unauthorised, read.

The disposal of those flyers has been criticised by University of Sydney staff on staff social network site, Yammer. 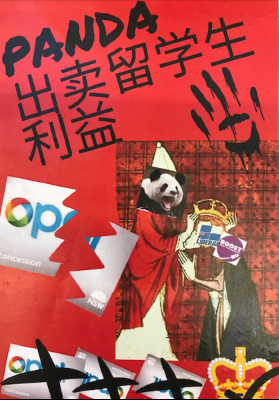 This year’s hot geopolitical topic on campus also entered the electoral arena with Facebook page “Sydney Universities Solidarity with Hong Kong” encouraging voters to not cast a ballot for Panda or Boost.

“[Panda] shut down the SRC’s attempts to hold rallies in solidarity with the Hong Kong protests. Panda members walked out of meetings when Hong Kong was brought up. A Panda office-bearer tore down a Lennon Wall on campus,” the admins said in a statement this afternoon.

A stack of “Josie = Liberal” flyers were confiscated by the EO in the afternoon because the flyers mentioned that Jakovac had “voted against a motion to support the decriminalisation of abortion in NSW,” a claim the EO said was not true.

Until Thursday evening, campus’ primary thoroughfares will be transformed into a patchwork of colours and campaigners. Vote in the elections at booths across campus on Wednesday 25th or Thursday 26th this week.

Follow our live blog for the latest coverage of the election here.

Got a tip? Send it to us here.

Got gripes? Email us: Editors@honisoit.com