Students and staff at the University of Sydney have pushed back against claims made by Four Corners that the Chinese Communist Party (CCP) has “infiltrated” Australian universities, labelling the assertions made by the program “one sided” and “extremely dangerous.”

The ABC broadcast an episode of Four Corners on Monday night entitled ‘Red Flags’ which sought to expose Chinese interference in Australian universities. It featured interviews with people such as Dan Tehan, the Federal Education Minister who recently launched a government taskforce into foreign interference, and Clive Hamilton, the author of ‘The Silent Invasion’.

The program gave prominence to a number of claims, including that the participation of Chinese students in student politics is “a gateway for CCP influence on campus.”

Jacky He, president of the University of Sydney Students’ Representative Council (SRC), was interviewed on the program. He claimed that Chinese students were being unfairly vilified.

Speaking to Honi, He claimed that programs like Four Corners are responsible for perpetuating unfair attitudes towards Chinese students who are simply trying to get an education.

“That may in turn lead to more schism and tension between international and domestic students and that may even have wider implications on the Australian society as a whole.” 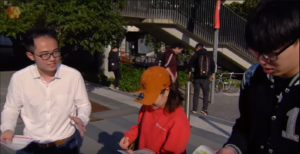 Parts of the program were filmed at the University of Sydney during the recent SRC elections, held in September.

Ellie Wilson, a student at the University and one of the SRC’s Ethnocultural Officers, says that she felt harassed and intimidated by the Four Corners film crew.

“On the last day of campaigning, during the last few hours of the day, a huge film crew started quite intrusively filming campaigners — more specifically, Chinese-appearing campaigners — and getting interviews from Chinese students. I was told by one of my friends that it was Four Corners making a documentary about Chinese influence in Australian student politics,” Wilson said.

Honi acknowledges that a photographer from a different publication was also present at the time and that the filming took place in a public place.

Dr David Brophy, a senior lecturer in modern Chinese history at the University of Sydney, also criticised the program’s portrayal of Chinese students and accused Four Corners of pursuing a “hawkish” editorial agenda.

“Infiltration, like invasion, is one of those terms that we seem to only use in reference to China. Language like that is designed to bias the discussion from the start, and it’s particularly dangerous as the headline for a story that involves Chinese international students — it’s as if we’re being invited to think of them as ‘infiltrators’,” Dr Brophy said.

Dr Brophy was a signatory to an open letter from a number of China studies academics that criticised the ‘foreign interference’ narrative spun by the government and large sections of the media.

Four Corners also claimed that Australian universities’ partnership with China is “putting their academic integrity at stake.” It cited Confucius Institutes — Chinese cultural centres which appear at a number of universities around the country — as one such example of this.

The University of Sydney rejected this claim.

“[The University of Sydney Confucius Institute] is not involved in any decisions around our research, curriculum or the general operation of the University,” a spokesperson said.

“We value our productive partnerships with Chinese universities and research institutions.”

Dr Brophy pushed back against the suggestion that academic critics of China were in any way silenced.

“I’ve put on events with Uyghur dissidents, spoken at Uyghur rallies, put videos of myself supporting the Uyghurs online, and never experienced any pushback for any of this. But since I went public with my support for Palestinian rights, pro-Israel groups and individuals have tried multiple times to put pressure on my job.”

In August, the Vice-Chancellor of the University of Sydney, Dr Michael Spence, warned that the ‘foreign interference’ debate has the potential to embolden racist attitudes.

“We have to be careful that the whole debate doesn’t have overtones of the White Australia Policy,” Dr Spence said in a statement to the Sydney Morning Herald.

There have been a number of attacks on campus this year targeting East Asian students, both verbal and physical.

Update: this article was updated for the purposes of accuracy and clarity on 16/10/19. It did not previously reflect the fact that additional media personnel contributed to the distress felt by Ms Wilson. It also previously said that Jacky He suggested that the program perpetuated racist and xenophobic attitudes. Mr He did not use these words.