The situation at the UTS Students’ Association (UTSSA) has intensified since Honi reported on sanctions imposed on the Education Action Group (EAG) last month.

Since then, President Aidan O’Rourke has extended further sanctions, including loss of swipe access, suspension of expenditure, room bookings, and access to Association spaces for the Women’s, Ethnocultural, Enviro, and Queer Collectives as punishment for withholding attendance lists in protest of the By-Laws.

At a UTSSA Council meeting on Wednesday 28 April, O’Rourke called security on two students who interrupted him to ask to hear his President’s Report.

“He gave three verbal warnings to one person in the space of about five seconds. There was no violence, everyone remained in their seat … The security said ‘it’s pretty obvious that there’s no threat here,’” Education Officer Ellie Woodward said. “It was incredibly irresponsible. There were women, queer people, Indigenous people, and people of colour in the room when he called security.”

EAG member Holly Hayne said “It’s a hallmark of how much Aidan thinks he can get away with that he feels empowered to attempt to physically remove UTS students from what should be open, democratic spaces, simply for asking questions he’d prefer not to answer.”

O’Rourke told Honi that “Security was asked to issue a formal request for a student to leave and to monitor and prevent further escalation of the meeting. Security was never asked to forcefully or physically remove students nor do I believe that this is appropriate…Every question was answered during the appropriate times of the meeting.”

The Council meeting came after Collectives presented a list of demands to O’Rourke and General Secretary Erin Dalton on 26 April, in the wake of more consequences imposed on Collectives in the past few weeks.

The comprehensive timeline of demands posted on the EAG’s Facebook page proposed measures for the UTSSA to restore collective autonomy and resources. O’Rourke told Honi that he has made “progress with several demands by Collectives which have been accepted, particularly concerning consultation with the Collectives, a financial funding agreement with the University and Collective handover.” However, student activists claim this is untrue.

2020 Queer Officer Melissa Sara said that “his consultation with the Collectives consisted of a meeting with collective OBs where he spoke over people and disregarded everything we said. We have made no progress with our demands. In regards to the funding agreement, the Students’ Association has continued to use the looming threat of management not awarding us funding as justification for their bullshit bureaucracy.”

OBs ‘intimidated’ at meeting with Executive

At a meeting on 26 April with Eshna Gupta, Melissa Sara and Ellie Woodward, O’Rourke and Dalton requested a written apology from Woodward and a written promise from Collective members stating that they would comply with the UTSSA By-Laws, or else face proceedings in front of a newly-established Grievance Procedure Committee.

Woodward may face the loss of Council membership and a 12 month ban on participating in elections, and has been given a one month notice for the consideration of the suspension of her honorarium.

This was as a consequence for withholding attendance lists and making negative statements about the UTSSA to Honi Soit, which O’Rourke allegedly argued was against the organisation’s Code of Conduct.

Collective members said they felt “intimidated” at the meeting and were continually interrupted in a “misogynistic” manner. Woodward told Honi that “Melissa was spoken over an incredible amount, it was actually really shocking to see. When we addressed that we were completely ignored.”

2020 National Union of Students (NUS) Queer Officer Dashie Prasad provided a statement: “The UTSSA has come forward with some very authoritarian demands of its office-bearers and Collectives. A stance like this goes against the democratic election of these office-bearers … To overturn their positions goes against the thousands of students who vote in the elections.”

Prasad emphasised this has the potential to cause repercussions from the University itself.

O’Rourke has contracted law firm King & Wood Mallesons, paying them thousands of dollars in UTSSA money to draft new Grievance Procedures. Collective members told Honi they believe O’Rourke is seeking legal advice in order to change the By-Laws to “shut down activism”. In a statement to Honi, O’Rourke said that the UTSSA has a “constitutional requirement” to establish the committee.

Honi has seen the UTSSA’s 2020 annual financial audit report, approved at their latest Council meeting. Last year saw a drastic increase in spending on consulting fees to $25,383 and a drop in almost $13,000 in Collective expenditure. 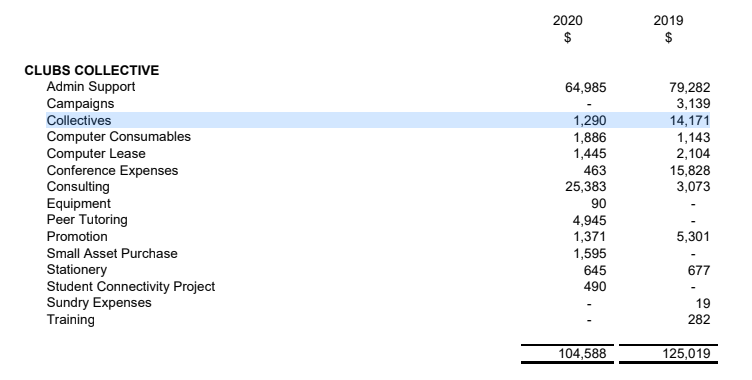 O’Rourke told Honi that “The current UTSSA Constitution was passed in November 2019 and fully enacted in November 2020. The change required independent consultants to assist in writing our By-Laws to be consistent with the Constitution and benchmark our election regulations against other student unions.” With the contracting of King & Wood Mallesons, it is likely that consulting fees will again eclipse Collective expenditure this year.

Highlighting the impact that navigating sanctions in the UTSSA has had on activists, Woodward told Honi: “It’s been incredibly frustrating to me and to members of the EAG that at a time when the Enterprise Bargaining Agreement is fast approaching and staff are being attacked, we have been purposefully held back in terms of our budget being suspended, us being banned from spaces, and it being very difficult to print and hold meetings in spaces.”

The continued repression of the UTS EAG coincides with reports of a $3.2 million cut to the UTS Faculty of Arts and Social Sciences, which Woodward has vowed to fight back against.

She spoke of the exhaustion of having to hold separate meetings for organising campaigns and for discussing how to deal with grievances in the UTSSA itself. “Meeting times have been held back by argument and discussion about this at a time we need to be spending organising, and that goes for all the collectives.”

“We have been restricted but thanks to solidarity from other activists, we can continue organising.”

Disclaimer: Claire Ollivain is a member of USyd Grassroots.

Editors’ note: This article was edited at 8:45pm to include comment from O’Rourke on security presence at the meeting.