The Federal Government has announced that fully vaccinated international students with an eligible visa will be able to return to Australia without needing an exemption from 1 December.

After a long wait, international students forced to study remotely offshore due to COVID-19 travel restrictions are expected to be back on university campuses for in-person learning next year.

But there remains some mixed messaging for students planning to return, who will be subject to different quarantine arrangements depending on which state or territory they travel to.

The New South Wales Government currently has pilot plans for the return of international students capped at 250 students per fortnight, and will not require students to quarantine if they are fully vaccinated with a TGA-recognised vaccine.

In the lead up to the Federal Government’s announcement on Monday, the University of Sydney had been advising international students that they would need to quarantine at Scape Redfern, despite the NSW Government scrapping quarantine requirements on 12 November.

Honi understands that international students planning to return to USyd have been under extreme anxiety due to contradictory advice about whether they will need to quarantine as well as confusion surrounding the selection criteria for the pilot program.

Incoming SRC International Student Officer and Ethnocultural Officer Ashrika Paruthi flew back to India in March 2020, so it’s been almost two years that she’s been studying offshore, making friends remotely and interacting with tutors who she’s never met in person.

Paruthi told Honi that being offshore was “extremely tough” and “definitely worsened [her] mental health,” but she’s ecstatic to not have to wake up at 3am to attend classes next year. “Being offshore certainly limited the opportunities I was able to utilise for maximising my potential.”

“While other universities had already informed their students about the quarantine being scrapped off for fully vaccinated international students, following the NSW Government’s official media release, our university’s Q&A page still stated that quarantine is nevertheless required.”

Navigating the University’s advice was extremely frustrating for many international students. “The inability to comprehend the selection criteria, due to lack of information, further exacerbated my future anxiety,” Paruthi said.

A University spokesperson told Honi that they will no longer require students returning under the International Arrivals Pilot Program to quarantine and have updated their advice online.

“We released an expression of interest process to understand our students’ level of interest in returning as part of the Arrivals Program. This information was matched against the eligibility criteria (i.e. vaccine status, visa type and status) to determine who would be contacted about an opportunity to join the initial flights,” the spokesperson said.

“Only continuing students were considered; this was a government requirement of this pilot program. Our students who must undertake face-to-face learning to complete their degrees were also prioritised as part of this plan.”

The first charter flight of international students is arriving on 6 December, and eligible students will be contacted by the University as more flights are announced.

In pre-pandemic numbers, education was Australia’s third-largest export industry and the return of international students is expected to accelerate economic recovery and boost the university sector.

While other NSW public universities saw a decline in revenue from international students in 2021 due to the impact of travel restrictions, international student enrolments at USyd rose by 32.5%, which helped the University consolidate its positive financial position at a surplus of $109 million. 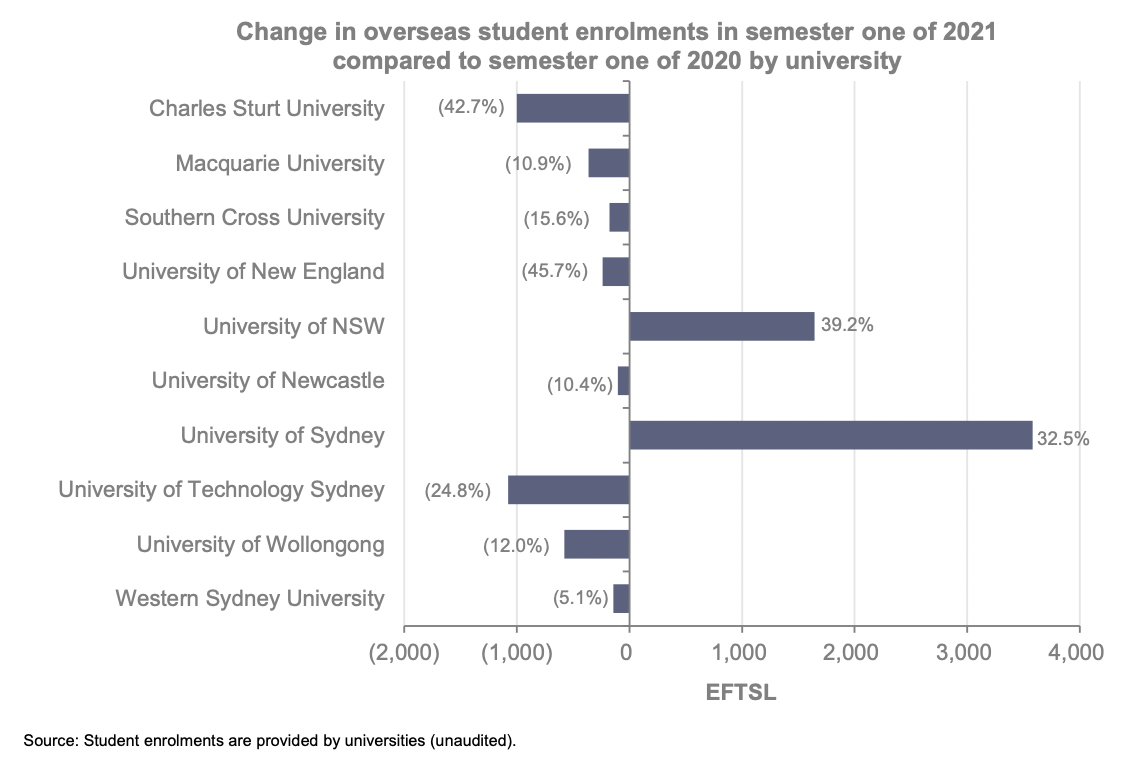 This is despite the University ‘crying poor’ to justify an onslaught of austerity measures including 223 voluntary redundancies, course cuts, and the ongoing casualisation of its workforce.

“This is great news which will give heart to more than 130,000 international students with visas waiting to return to Australia. They want nothing more than to re-join their classmates in Australia.”

“The value of international students to Australia is more than just the impact they have on the economy and employment, though their $3.1 billion annual economic contribution and support for 250,000 jobs is important,” Jackson added.