“All the signs were there” is what many of Anna Delvey’s victims bitterly admit in hindsight. Whether it was the way she announced her ‘wealth’ as she entered a room with a Birkin on her arm, or the tailored suits that hugged her body, Delvey cultivated an image of wealth that gained her access to the elite circles of New York in the mid-2010s. And in America, image is currency.

Appearing wealthy is at the heart of the real-life events that inspired Inventing Anna, a new Netflix series based on Jessica Pressler’s New York article about Anna Sorokin, a serial-grifter who conned Manhattan’s hotels, restaurants, banks, and elite into believing she was a German heiress named Anna Delvey. She was convicted of grand larceny and theft of services, landing her in Riker’s Island state prison — “home of New York’s boldest.”

Sartorial upward mobility isn’t as hard as it used to be. When the royal courts of Europe reigned supreme, the distinction of wealthy individuals in Western dress was dictated by minutiae like the length of one’s hem, how many buttons were on a man’s jacket, or the rarity of the fabric on a grande dame’s dress. The devil was in the details. But in the late twentieth century, with the expansion of luxury conglomerates into an aspiring middle-market, wearing your wealth” on your sleeve can be as simple as wearing a jumper covered in the logo that once embossed the trunks of kings and queens of Europe’s past. Wealth is now branded. 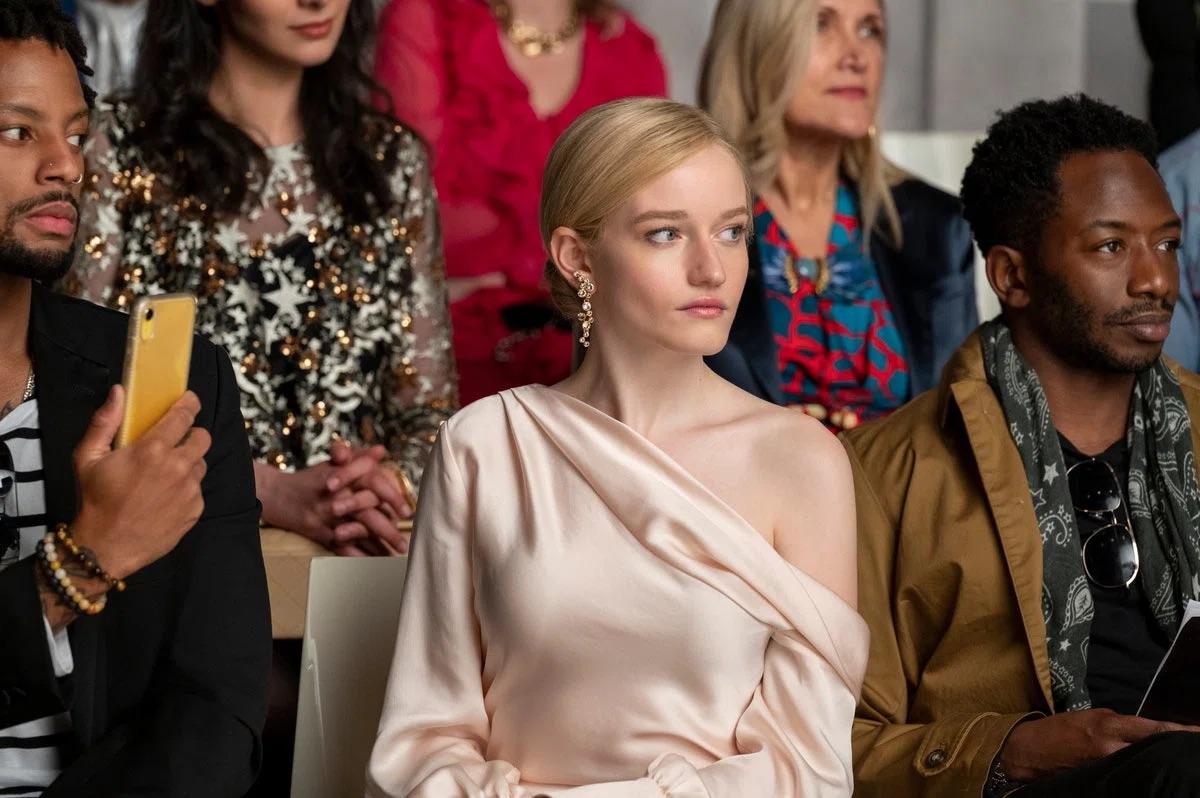 In Inventing Anna, an Anna Sorokin (played by Julia Garner) dressed ostentatiously in designer logos could’ve been the easiest marker of aspirational wealth. But costume designers Lyn Paolo and Laura Frecon researched Sorokin’s Instagram account for the particular sensibilities fit for a supposed German heiress. In the earlier episodes trailing Sorokin’s rise into fraudulent escapades, she sits imposingly, like a Spanish infanta, as a front-row fixture at a fashion show in a draped off-the-shoulder pale pink dress by Jonathan Simkhai, paired with statement Oscar de la Renta earrings reminiscent of a Lindsay Adelman chandelier. In a scene with the art-world elite, where Sorokin pitches her business proposal for a dynamic visual-arts members club, the “Anna Delvey Foundation” (ADF), she is clad in a Dolce & Gabbana floral jacquard blazer to suss out prospective patrons. 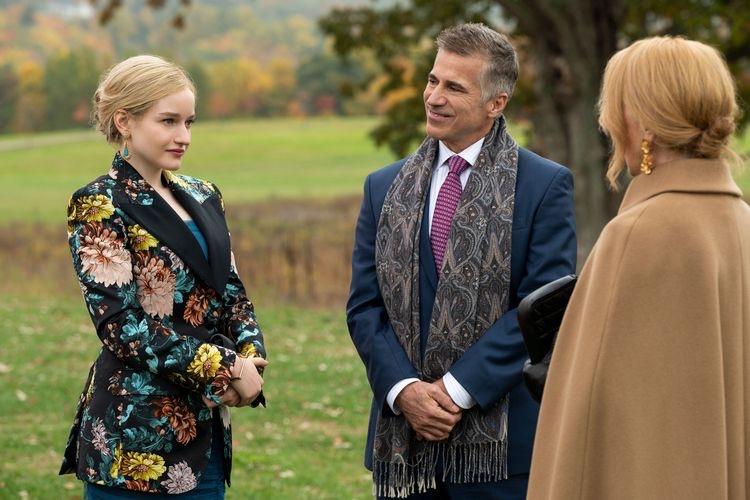 Paolo and Frecon convey both Sorokin’s mindset and ‘chameleon’ ability to shift her style to her surroundings, ensnaring her specific audience.  In Sorokin’s mind, she is already wealthy. She embodies her alter-ego — right to the correct lapel. As revealed in the show, fashion’s subtle semiotic cues are what allowed Sorokin access to the circles of society’s doyennes and for her ADF proposal to have gone as far as it did. In Anna’s first meeting with Alan Reed (Anthony Edwards), a prominent lawyer assisting in securing her a US$40 million loan from Fortress Investment Group, she swans into his office and is immediately dismissed in her metallic ruffled mini-dress. Returning unannounced, now in a black v-neck suit from The Row, grey Chanel tote bag, and a home self-dye job à la cool (gone) girl Amy Dunne. With new eyes (on the money, of course), Reed agrees to help her.

Throughout the series, Sorokin particularly notes, “New York is where I belong.” Whether it’s to persuade a potential investor or buy herself time in rehab in California before her arrest, it’s a sentiment that’s resonant with the twenty-first century American Dream. This was formerly conceptualised by the ethos of working hard and reaping the benefits through the adage if you can make it here, you can make it anywhere. But, as the series and Anna Sorokin’s true story portrays, working hard is rarely enough for upward mobility under neoliberal capitalism. As Anna navigates the conservative circles of bankers and New York’s establishment, her identity as an immigrant (although “wealthy”), and the idea for ADF, isn’t taken seriously. Sorokin remarks in her second meeting with Reed, “if I were a man with the right accent, in the right suit, from the right Ivy League college, would I still be knocking on doors?”

The show’s creator, Shonda Rhimes, hits the nail on the head in highlighting the ever-present white-male privilege that still permeates society today, particularly in business circles and the ranks Anna must ascend — although doing so illegally — to bring her dreams to the light.

A portrait of a convicted Anna Sorokin now hangs in X Museum, Beijing, owned by art collector Michael Xufu Huang. Huang was scammed out of $3000 in hotel charges by Sorokin when they attended the Venice Biennale together in 2015. Art byGong Jian, Muse NO.3, acrylic on canvas, 45 x 35 cm, X Museum Collection.

Inventing Anna is a cautionary tale for outsiders navigating privileged circles. Throughout the series, Sorokin’s approach to creating and dressing Anna Delvey is reminiscent of the tell-tale signs of wealth in noble times; once again, the devil is in the details. Sorokin dons Delvey’s sartorial skin with subdued nonchalance that aims to be tasteful — but to appear as “wealthy,” is seldom avant-garde. Rather, this skin is just right to please the right crowd. Despite being business-savvy and having an eye for art and fashion that her wealthier victims found a likeness to, Sorokin’s downfall only further highlights the gatekeeping and barriers present for the outsider. Knowing your stuff just isn’t enough — and so goes the American Dream.