Happy First Monday in May to those that observe! The Met Costume Institute’s Met Gala returned this year with the theme ‘Gilded Glamour’, posed by Anna Wintour to celebrate the opening of Andrew Bolton’s exhibition, In America: An Anthology of Fashion. ‘Gilded Glamour’ is the second part to 2021’s ‘American Independence’, and stirred fervent anticipation among those following for the potential fashions that would grace the Met steps. Whether one is a well-versed fashion enthusiast or scrolling through their Instagram feed in sweatpants, it’s always a spectacle that unites discussions over the question: “Did they follow the theme?”

The night’s theme referenced the Gilded Age, a period in American history spanning 1870 to the early-1900s. This era saw the rise of nouveau riche (new-money) families that dominated the railroad, oil, steel, and banking industries, and rapid economic growth for the upper echelons of New York society after the Civil War. Nonetheless, the Gilded Age was characterised by an eroding society under this thin veil of gold. The laissez-faire economy that made industrious business owners obscenely wealthy meant unsafe working conditions and exceedingly low pay for the working class, and the exploitation of migrant workers seeking a better life in the US.

To select a Gilded Age theme that would deliver subversive messaging and challenge the mainstream historical narrative would be a naïve expectation to have of one of the world’s most elite events. Rather, it was selected for its ‘easy’ access for designers to interpret and reference the period’s historical dress and opulence. There is no hidden message in ‘Gilded Glamour,’ although it offers a poignant reflection of the zeitgeist.

In its larger thematic sense, nothing could feel more aptly familiar amidst the world’s inflating costs of living, social upheaval than the glorious excess that was the Gilded Age. Further, inequality is the highest it’s been since the actual Gilded Age; the Forbes 400 report found America’s 400 richest individuals saw their collective fortune increase by 40% in 2021, to US$4.5 trillion. And with Elon Musk in attendance, and Instagram (Meta) sponsoring the event, it’s a peacock display of performative wealth that completely dismisses the social crises happening beyond the Met steps.

Curator Andrew Bolton’s exhibit, In America: An Anthology of Fashion, is premised on defining nineteenth- and twentieth-century American fashion through nine installations of storytelling vignettes set in the Met’s American period rooms. The project is a collaboration with film directors Sofia Coppola, Martin Scorsese, Chloé Zhao, and Tom Ford, among other auteurs. The “storytelling” of American fashion was a particular touchpoint for Instagram’s sponsorship of the exhibit and gala; Instagram’s director of fashion partnerships Eva Chen, said: “The theme of American storytelling and the sharing of untold stories felt apt [for the sponsorship]”. (Because what is Instagram but the main storytelling medium of today?) 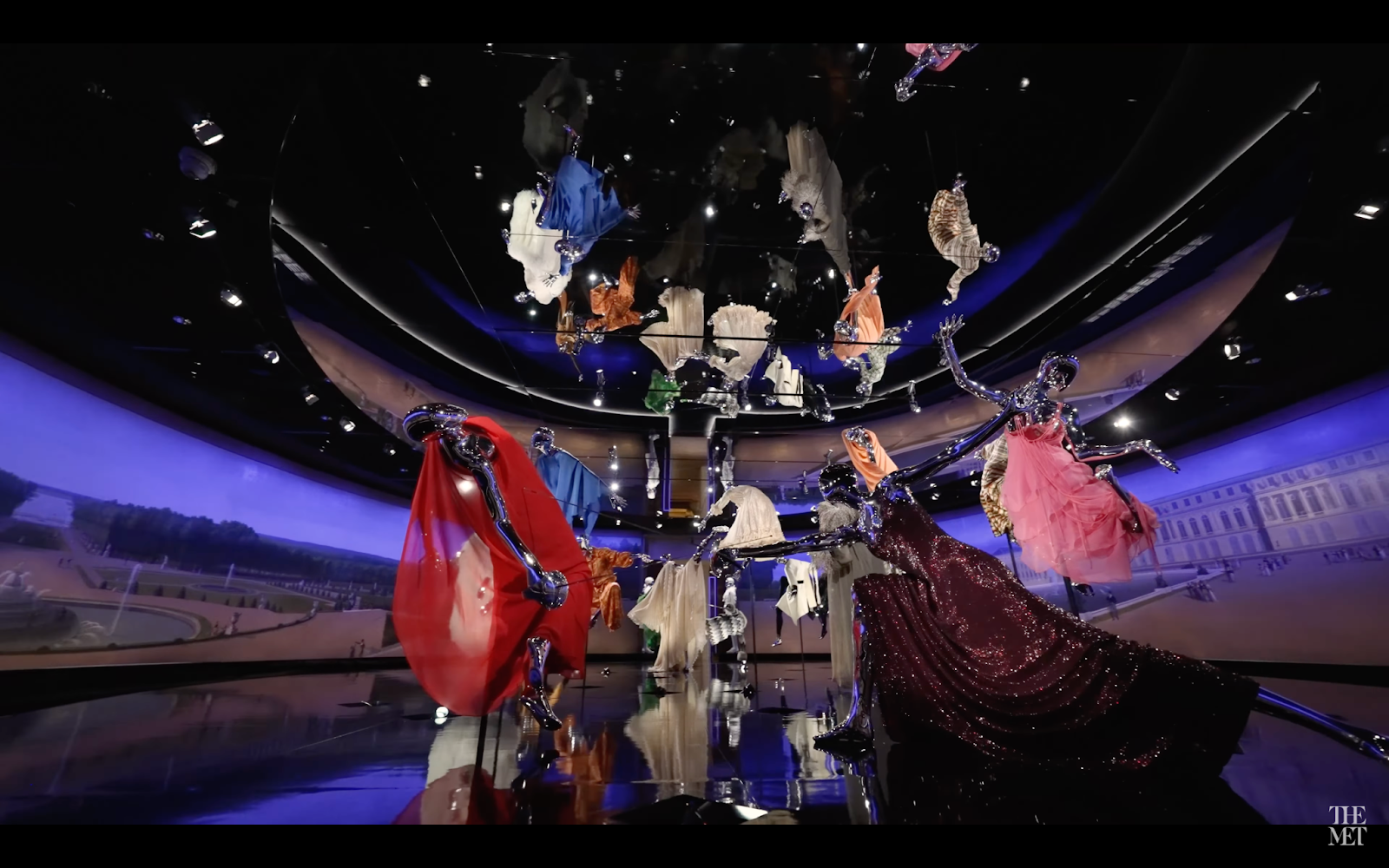 A vignette by designer and director, Tom Ford, depicting the 1973 trans-Atlantic fashion event, ‘the Battle of Versailles,’ in the Vanderlyn Panorama room. The not-so-static display of the garments create a dynamic and dramatic vignette, displaying the modernity and vitality of the choreography, designed by five American designers that won against their opposing five French couturiers.

Yet Instagram sponsoring this year’s event also could not feel more appropriate for representing how we consume fashion today. That is, a context where the prospect (and perhaps the threat) of it being transformed into spectacle — via photograph, video, and social media post — is ever-present.

Established in 1948 as a fundraiser for the newly-founded Costume Institute, the Met Gala has only grown in spectacle since invitations were extended to celebrities in the 1980s. With its rumoured “no phones inside” rule for gala attendees, the event has only recently started live-streaming the red carpet on social platforms like Instagram. Attendees now share ‘get-ready-with-me’ videos, and the lauded bathroom selfie or disposable camera shots from inside, all shared, documented and anticipated for on Instagram. (Kaia Gerber brought her Contax for some ‘what i see’ Brooklyn Beckham-esque shots – point-and-shoot it like Beckham, I say).

The inaccessibility of the gala, which has made it a cultural phenomenon for celebrity culture, is further fetishised and exploited through social media  – with viewers wanting (and receiving) access to every step leading up to the Met steps.

Indeed, pomp and circumstance may have changed, but our collective hunger for all things that glitter has not since the Gilded Age.

WHO WAS MOST GILDED?

Interpretation of the Met Gala theme is always subjective to the designer dressing their assigned attendee. Though not following the theme is nothing new, ‘Gilded Glamour’ was relatively easy given the clear sartorial narrative of the period – what is American about Gilded Age fashion if not trans-Atlantic, trickled down Victorian fashion? But those most successful at interpreting the theme (period accurate, that is) made for contemporary interpretations of the Gilded Age.

One of the lesser talked-about looks of the night was Carey Mulligan’s custom Schiaparelli dress by Daniel Roseberry, of a black wool crepe column and resplendent gold chevron embroidery, taken from the spring-summer 2022 couture collection. Although deceptively simple, the dress features a subtle bustle that achieved its fullness not through wiring or whale-boning (as was traditional in the period), but by fabric alone. 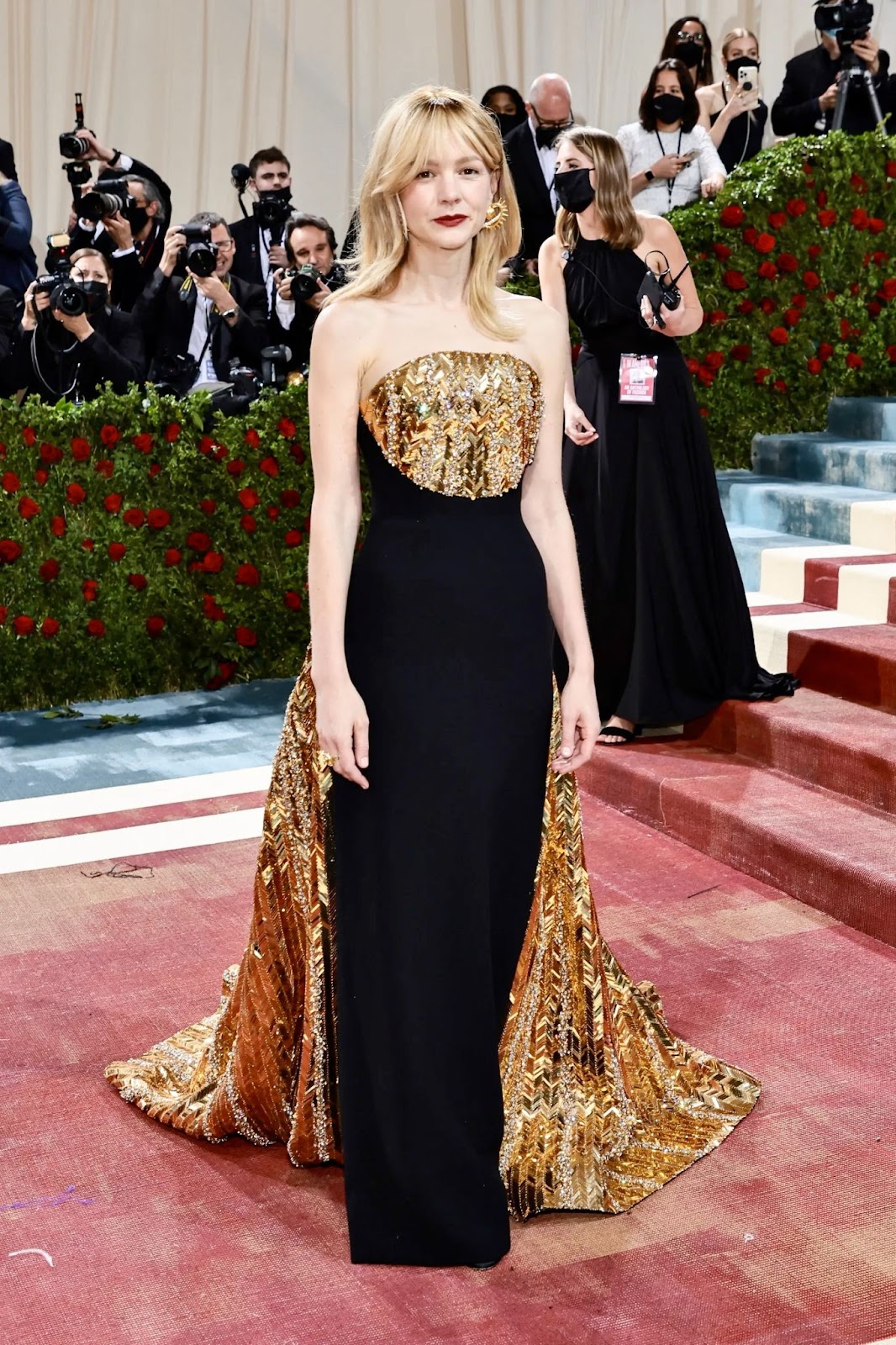 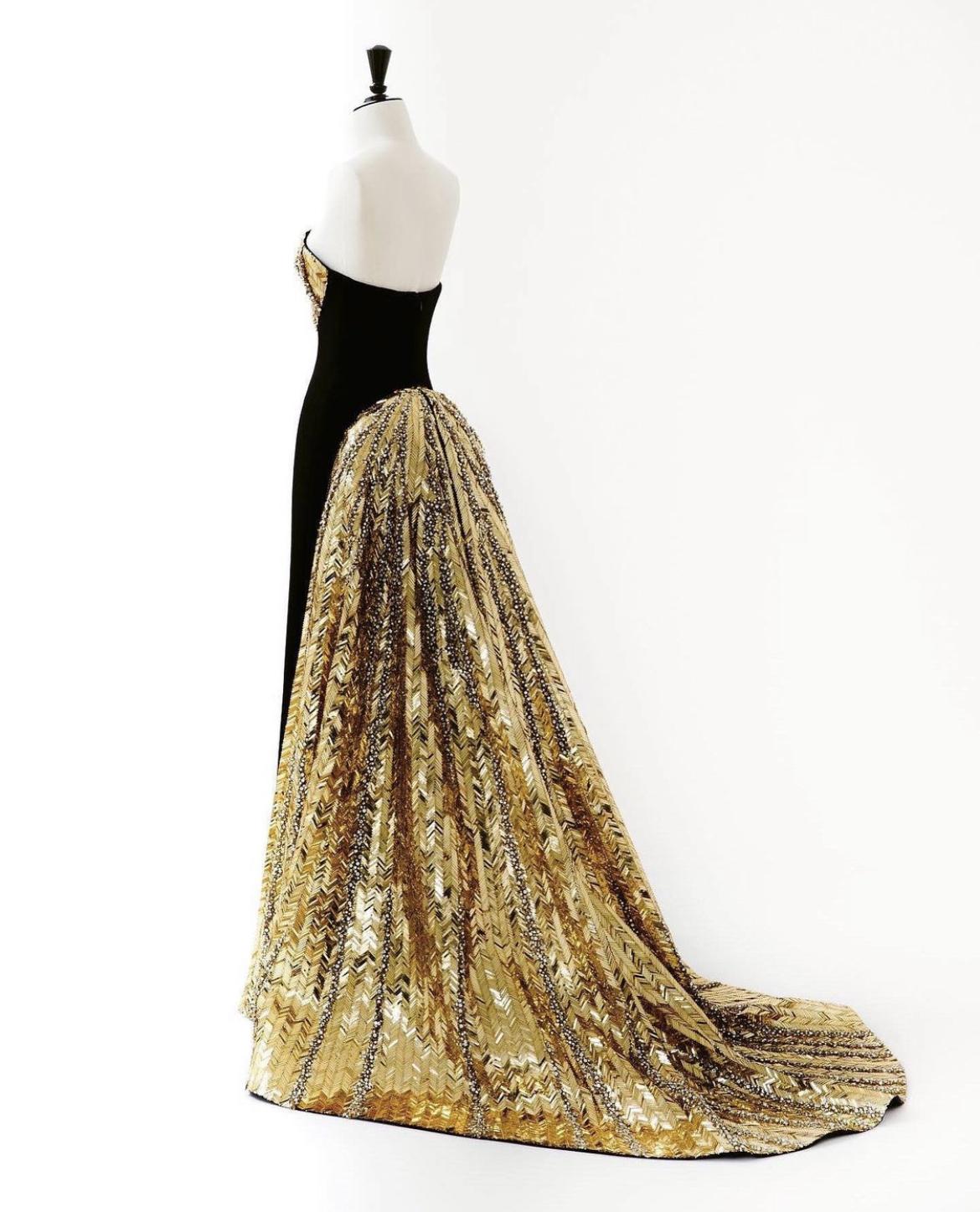 This was an innovation during the mid to late-1930s, where couturiers like Elsa Schiaparelli, Cristóbal Balenciaga, and Madeleine Vionnet translated styles of the Gilded Age to create softer and elegant, but less voluptuous, silhouettes – subtly accommodating the natural form for a 1930s BBL. Roseberry was able to translate Schiaparelli’s design history, his own sensibilities of the black and gold (his hallmark contribution to Schiaparelli’s surrealist history), and, of course, the theme, for a contemporary take on the Gilded Age – Tom Ford eat your heart out.

The consumption of fashion and the gala today is a far cry from the intimacy it once guarded pre-social media. And, as the more galas follow, we will continue to demand more access to the gala’s  completely inaccessible opulence, brushing it off as mere escapism. However, the ‘Gilded Glamour’ theme is a poignant reflection of our 21st century cultural zeitgeist of social media spectacle, celebrity, and performative opulence, counterposed against burgeoning social and humanitarian issues. We are the media vultures that ‘morally demand’ access to the inaccessible. Unable to tear our teeth away from the glittery feast, yet making sure we bite hard enough to leave a lasting mark on those we prey on in this media frenzy.