What Wimbledon is to Federer, or the Masters tournament to Tiger Woods, the World Championships and Commonwealth Games are the ultimate ‘slams’ for our Australian athletes. Okay yes, the Olympics is the most prestigious sporting event and garners the globe’s attention, but these two major championships offer our Aussies some of the best chances to snag medals, establish themselves on the world stage, create sporting legends and most importantly, beat the English.

Due to the ongoing COVID-19 pandemic, and the subsequent postponement of the Olympics to 2021, the World Athletics Championships and Commonwealth Games have fallen in the same year. In addition to these global athletic events, the World Indoor Championships and World Under 20 Championships also happened this year, resulting in four worldwide contests in 2022. This unprecedented scenario has allowed our Australian track and field athletes to showcase their amazing talents several times throughout the year.

To put a quick statistical spin on our successes: at the 2022 World Championships in Eugene, Oregon, the Australian team achieved their most successful championship in well over a decade. The team had a total of 62 athletes, won three medals (two gold, one bronze), achieved nine personal bests, 30 season bests, 11 top eight finishes, and 65 per cent of the athletes managed to finish higher than their world ranking. The big takeaway is that 37 per cent of the team—or 23 athletes—made finals appearances: the most Australian athletes to make a world final in over 10 years.

Statistical analysis is great, but it can distil an athlete or team’s performances into numbers that don’t always reflect the complete picture. Hearing and understanding our athletes’ journeys, hardships and successes throughout their careers can tell us far more about the significance of these athletes’ achievements. It’s these aspects of an athletic career that really resonate with mere mortals like you and me.

Many now know the outrageous ‘Flying Mullet’ hairstyle of 100m sprinter Rohan Browning, after he shot to national recognition for his exploits at the 2021 Tokyo Olympics, where he nearly broke that magical 10 second barrier to make the semi-final run. However, the USyd athlete, who is managing to juggle a Bachelor of Arts/Law degree and a world-class sprinting career, has had, even by his high standards, a mixed 2022. 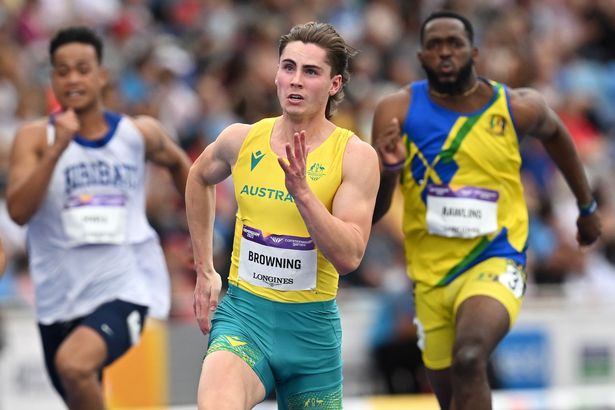 A hamstring injury early in the season put him out of the national championships, but he did manage to recover and race in Japan in the lead-up to the World Championships. A focus for Browning this season has been on the first 10-20 metres of his race, becoming more technically consistent in the drive phase.

A week before the World Championships rolled around, Browning clocked a brisk 10.08 seconds, marking a return to the sub 10.10 seconds club. The Commonwealth Games offered another opportunity to showcase how much he’d grown as a sprinter. Browning ran sixth in that final, with a time of 10.20. On paper, it might not look like a ‘great’ record, but the winning time was only 10.02, and Browning was only an incredible 0.06 seconds off a medal. Over the past four years, he has put together an impressive resume, consistently building from year to year, continuously improving his technique and results at the international level. If this upward trajectory is anything to go by, that magical sub-10 barrier may just be shattered sometime soon.

The last two years has seen Mackenzie Little become a giant on the world javelin stage. After graduating from Stanford, the high flying javelin thrower returned home and commenced a Doctor of Medicine program at USyd and is part of the SUSF Elite Athlete Program.  After becoming the Australian and Oceanian Champion this year, she scraped into the final at the World Championships, where her opening throw in the final sailed all the way to 63.22 metres, a new personal best, ultimately enabling her to finish a fantastic fifth. At the Commonwealth Games, Little was a near certainty for a medal, and a genuine contender for the gold. Again, her opening throw produced a PB, putting the rest of the field under immense pressure. After leading for the majority of the competition, with another PB in the fifth round, she was knocked down a peg by fellow Australian Kelsey-Lee Barber by a mere 16 centimetres. Despite competing at the highest level, Little manages a full-time university degree and works one day a week at the Royal North Shore Hospital. All in all, for an athlete who is only 25 and believes the best is yet to come for both her javelin and medical careers, the future looks incredibly bright.

Nicola Olygslagers, who graduated earlier this year, is undoubtedly a world class high jumper; the crème de la crème, really. After a stellar 2021, which resulted in a sterling silver at the Olympics, Nicola has not quite hit the same highs this year. However, anyone who has watched her jumps at the World Championships can see she still revels in clearing every height and was still a top flight contender.

Sydney University Athletics Club Co-captain Michelle ‘Shelly’ Jenneke who is rightly famous for her pre-race dance warm up routine has had an incredible come-back year in the 100m hurdles. An Olympian, World Championship, Commonwealth Games and World University Games representative, Jenneke has reached heights most athletes only dream of. After enduring a difficult 2021, where she failed to qualify for the Olympics, she fought back from injury and this year, at the World Championships, raced in a world-record setting semi-final that saw her finish fifth with a massive new PB, taking her to the number two spot on the all time Australian list, behind the great Sally Pearson.

This year has certainly been a year of ups and down for Ollie Hoare, our 1500m national champion. Ollie kicked off the calendar with a string of top five finishes, and seemed to be in fine shape early on in the season coming into the World Indoor Championships. There, he made the final and ran a very respectable fifth in a race where the Championship record was broken. From there, Ollie finished inside the top three in every major meet. Then came the World Outdoor Championships, where he went in as one of the favourites for the title. Unfortunately, things did not go to plan tactically and he was knocked out in the semi-finals. In Ollie’s own words, “you have to have those bumps in your career otherwise you can’t be great, you can’t medal if you don’t know how to lose”. 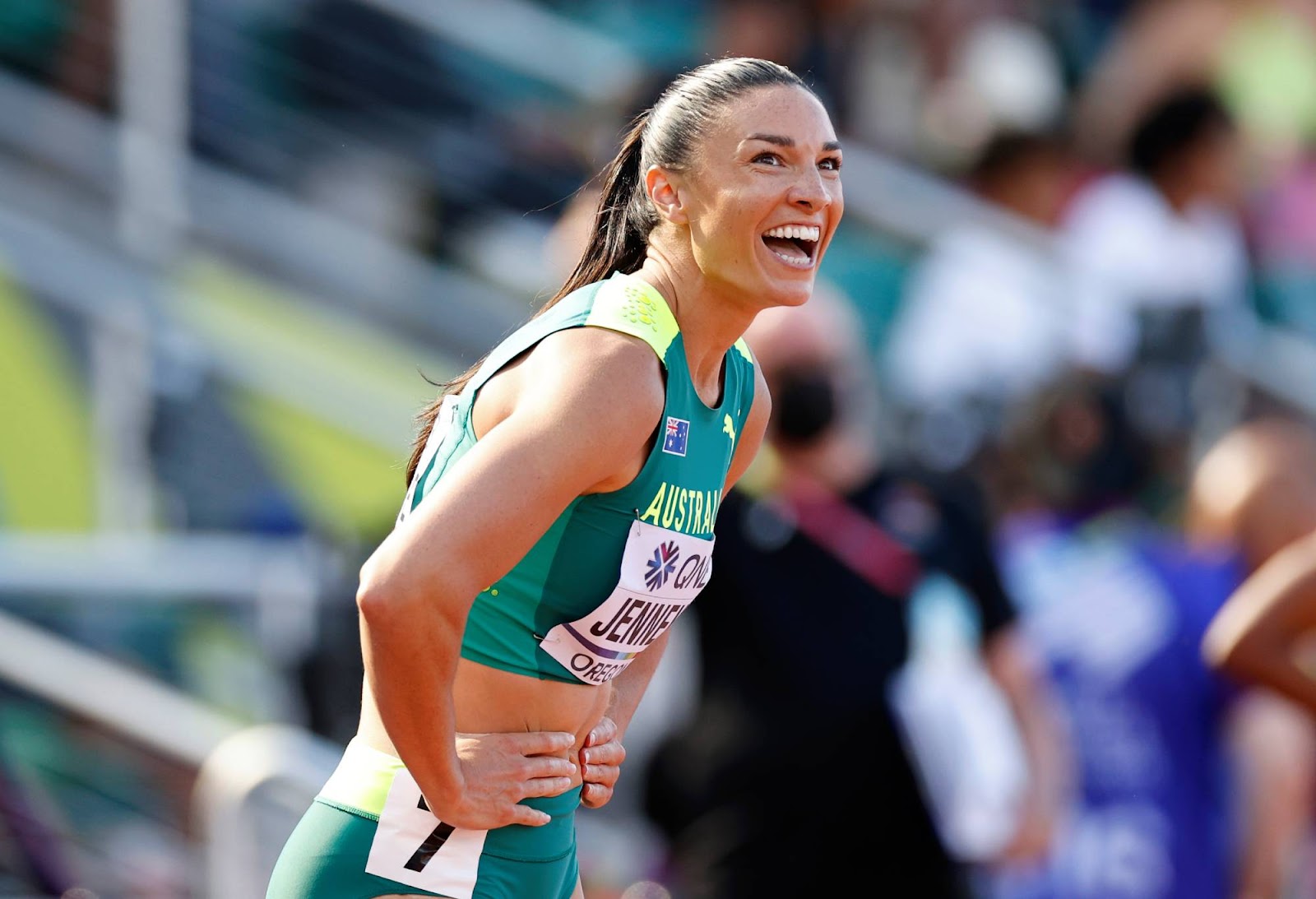 Michelle Jenneke at the 2022 World Championships

This is an athlete who can dust himself off and bounce back, and boy did he. Let’s set the scene: the Commonwealth Games in the heart of England, a stacked 1500m final field, including the newly crowned World Champion Jake Wightman (Scotland) and 2019 World Champion Timothy Cheruiyot (Kenya). Bang! The gun goes off and the field is away, the first laps are reasonably swift with Ollie being well-positioned throughout. Final lap, with 200 metres to go, as he did in the World Championship, Wightman makes a move for the lead, with Cheruiyot giving chase and Hoare coming to the outside with 100 metres to go. The Scot fades in the final 30 metres, seemingly leaving the Kenyan to clinch the title, but Ollie comes home with a barnstorming final 100 metres to take the title. Commonwealth Champion, Games record, two seconds off his PB, and the first Australian since the great Herb Elliot in 1958 to win the Commonwealth 1500m title. Nuff said.

Judging by the performances at the Commonwealth Games and World Championships of the USyd athletes and the Australian team as a whole, it’s safe to say that Australia is at the start of a new golden age of track and field on the world stage.