A game with no natural ending or even a main goal sounds like a recipe for disaster, yet Minecraft is exactly this and it is unbelievably rewarding. Originally released in 2009 for the PC, the game garnered a cult following, with players littering YouTube with videos of their gameplay and creations. Now available on the Xbox 360 via the Live Arcade, Minecraft: Xbox 360 Edition maintains much of the allure of its PC predecessor whilst adding new features and offering increased accessibility for new players. Fans of the PC title may feel that the game is a step backwards, but overall the game provides hours of unstructured fun.

For those unfamiliar with the title, the core gameplay of Minecraft consists of (funnily enough) mining and crafting. Everything the player makes requires resources. The world is constructed out of square blocks of varying materials which the player can harvest and use to create new structures and items. Basic materials such as dirt, wood and stone are in abundance, and will allow players to build simple structures and items to protect themselves from the dangerous zombies, spiders and suicide-bombers known as ‘creepers’ which inhabit the land. But more advanced items, weaponry and armour require rare minerals, requiring players to dig deeper and delve further into dangerous territory in order to find diamonds and gold.

The game consciously imitates the graphical style of yesteryear. The small square blocks which make up the world are reminiscent of the pixelated 8 bit era. It lacks the high definition of modern games, but this approach gives the game a certain charm.

While the game is an amazing experience, players of the PC original may find the transition to the Xbox 360 platform jarring and relatively unfulfilling. For those unfamiliar with the title, Minecraft is periodically updated by its creators, offering new content and features to its gamers for free.

The Xbox rendition is based on a beta (public trial) version of the game released last year, meaning that anything added to the PC version over the last year or so is absent from the Xbox version. The Xbox version also lacks the user-created modifications, such as new texture packs and in-game items, which have made the title so appealing. 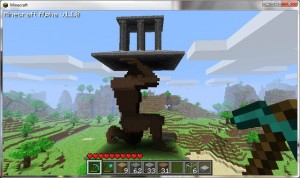 Fans of the PC version will also be disappointed by the lack of a free-form creative mode, but it’s not a huge detraction from the overall experience.

However, what the PC version lacks, the Xbox version contains. While the original PC version gave little advice or indication of what to do in order to succeed, the Xbox version adds a number of tutorials and a streamlined crafting system, making it much easier for new players to approach the game.

The Xbox edition also addresses the PC version’s unstable multiplayer issue directly, providing an extremely robust and enjoyable multiplayer experience supporting up to eight players online and four players split-screen offline. In both cases, guests can drop in and out of the game at any time, helping their host gather resources and build structures. It’s a really fun experience exploring dark caverns with friends, and provides a great way to show off your creations.

It’s an incredibly charming game, and while it may not quite entice veteran PC players, Minecraft: Xbox 360 Edition will keep newer players (and those with friends) entertained for hours.