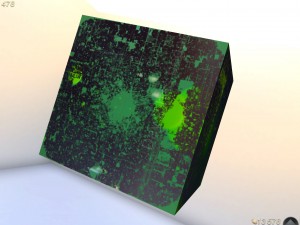 Late last year gaming studio 22cans released Curiosity: What’s Inside the Cube? and changed the world forever. It is both a brutal and unfailing testament to the horrific machinations that prop up our society, and possibly the worst game that has been and ever will be created.

The basic gist is that there is a gigantic cube floating in front of you, the surfaces of which comprise millions of tiny squares.  You and anyone else playing the game at the time can destroy a square by tapping it. Every time you do so you get coins, which can be spent on things which help you destroy squares faster. If you wish, you can spend real dollars to download tools which also help you destroy squares faster. Your goal is to remove all of the cube’s layers, which at the time of writing had not been numbered by game developers. Why should you bother with this extremely monotonous mission, you ask? Because, as the introduction claims, “something amazing is hidden at the centre of the cube … but only one person will find out what’s inside.”

I heartily recommend you download Curiosity, play for five seconds and then immediately uninstall so you can grasp at least some of the horror I’m attempting to convey.

It wouldn’t be so bad if it flopped. Sure, the developers seemingly possess a general contempt for humanity, but terrible games are made every day. Most are only ever seen again in five dollar bargain bins. No, the really frustrating part about the Curiosity saga is how many people play it. It’s been downloaded over 500 000 times for Android devices alone, and over 200 layers have been destroyed since its release.

This sheer popularity belies a darker tale. 22cans prefer to call Curiosity an experiment rather than a game. Perhaps Curiosity is purposefully shit. Perhaps the point is to see whether a dubious promise of life-changing happiness for one lucky individual is enough to motivate hundreds of thousands of people to endlessly tap a screen. The basic tenet of the American dream is that anyone can succeed in society if they work hard enough, regardless of social or economic standing. According to the Curiosity statistics (which, amazingly, you have to pay to see) the number of users is declining dramatically. People are rapidly giving up the dream in-game. How long before they do so IRL?