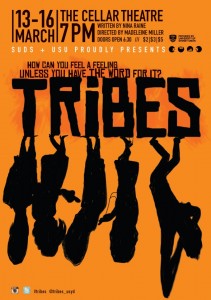 Director Madeleine Miller had initial reservations about putting on Nina Raines’ Tribes. The play, a drama about a barely functional family held together in loose orbit around their deaf son Billy, involved complex sign language sequences and real-time subtitling. But personal circumstances – her parents’ own divorce – drove Miller to realise the project.

Interested in the dissonance between the family’s fondness for words and verbiage, and their concurrent ‘emotional inarticulation’, Miller and her cast probe the boundaries of language, communication and ‘political correctness’.

The play provided escape and catharsis in equal measure. Familial banter was a highlight as the adroitly dysfunctional cast exchanged quips and ‘fucks’ with breakneck speed and expert comedic timing.  Robert Boddington, the surly and cerebral father of the family stole several scenes through his vociferous, baritone outrage at “audists” and the “the hard-line deaf”.

Mother and straight woman, Eliza Owen, brought raucous laughter in a terrific scene about Japanese fashion that challenges the law of diminishing marginal returns on how many laughs an actor can milk from the word ‘kimono’ – and then real grief in a weightier moment in the play’s second act.

Brothers Daniel and Billy, Nathaniel Pemberton and Ryan Knight, respectively, sit at the emotional core of the play. Their quieter, fraternal exchanges, often tempered by Daniel’s self-loathing and paternalistic love for Billy, ground the otherwise frenetic nature of the play’s ensemble scenes.

Concerned broadly with linguistics, outsiders and minority communities, the play never drifts too far from the central story of a family in crisis – captured and put to the fore through Miller’s direction. The usual tropes of farce, miscommunication, and misinterpretation are amplified by characters’ stutter, signing and deafness.

In addition to an impressive technical achievement, SUDS’ Tribes is contemporary theatre, it is student theatre, and above all it is good, emotive and entertaining theatre.